Fear and fundamentalism in India

In the Indian state of Orissa, Chris Morris finds communities in shock following a wave of anti-Christian violence, which has forced thousands to flee. 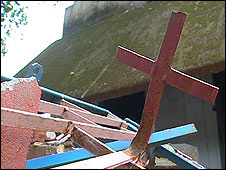 Over two millennia, thousands of intricately carved Hindu temples have been constructed in Orissa's state capital.

Many of them still stand testimony to the faith of the people. They are often places of serenity and calm.

But travel for five hours into the interior, into the lush green hills of central Orissa, and Hinduism takes on a new and more menacing form.

In the remote district of Khandamal, fundamentalists have been at work.

Militant groups who say they speak in the name of Hinduism, have been burning Bibles and killing Christians.

Horror stories have emerged from the worst anti-Christian pogroms since Indian independence.

At one of the many relief camps dotted around the region, I was told of a man named Parikkit Nayak, who escaped from the initial surge of violence.

Two days later as he tried to flee from his village with his wife and two children, he was caught by a local mob.

Bruised and battered, he was then paraded through the village like an animal and asked if he would renounce Christianity. When he said no, he was cut to pieces with knives, while his young family had to look on.

Across Khandamal tens of thousands of Christians are now living in fear. 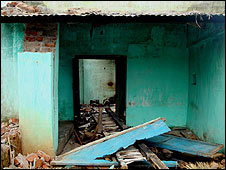 For many, returning to their homes is too dangerous

Many have moved into camps set up by the government, with armed guards at the gate.

Others are living in the shadows, spending the nights hidden in the forest before venturing back to deserted villages during the day.

In one such village, littered with empty, burnt-out houses, we were speaking to a nervous elderly woman, when the sound of a conch shell being blown echoed through the trees.

"They're coming," she cried. "You must leave now."

She pushed us away, picked up the folds of her dirty blue sari, and ran for her life.

For others, returning to their village is still too dangerous.

I met a young priest named Manoj, now in temporary exile, who related the story of his father.

"They came to our house and held an axe to his neck. 'If you stay Christian', he was told, 'you will be killed.' He was taken to a local temple and forced to convert."

"To live in this world today," Manoj's father relates in a letter smuggled out of his village, "we have to live as Hindus."


Part of this organised campaign of intimidation and terror has been the destruction of local churches and prayer houses.

More than 200 have been attacked and burnt.

Some of them now have saffron Hindu flags flying above desecrated altars and broken roofs. A sign of conquest.

As we walked through one abandoned house, a Hindu couple from the neighbouring village appeared. 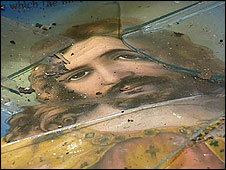 There was no hostility here, only a sense of regret as they looked at half-burnt photographs in broken frames - the faces of the people who used to live here.

"There's not much we can do to help, but we never had any problem with them," the woman said. "This was the work of extremists."

Why is it happening? As ever, it depends on who you ask.

Others speak of complex caste and tribal rivalries in one of India's most backward and isolated places.

"The cake has several layers," says the government representative in Khandamal, Kishan Kumar.

"There's a tribal layer, and there's a layer of economic rivalry. But the icing on top of the cake is organised religious violence. And that's what we've seen here."

Belatedly, the central government has acted against the instigators.

Hundreds of people have been arrested, and there have been calls for a nationwide ban on groups such as the Bajrang Dal, the self-styled warriors of militant Hindu nationalism.

There is a strong suspicion that the brutality in Khandamal, and a series of attacks against churches elsewhere in India, is part of a deliberate political plan to stoke communal tensions before a general election next year.

The immediate trigger for the violence may have been the murder of a controversial Hindu leader, for which Maoist rebels have claimed responsibility.

But the finger of blame was pointed at the Christian community and the mobs unleashed their savage response.

So Khandamal is now watching and waiting, awash with stories and people who want to tell them.

Late at night we sat with one young woman who has been hidden for her own protection. 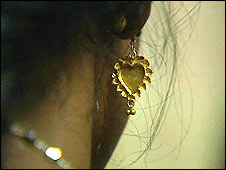 Even though she herself is a Hindu, she was gang-raped by her grandparents' neighbours because her uncle refused to renounce his Christian beliefs.

As a nun held her by the hand, she choked back tears and looked up.

"They're threatening to kill all of us - me, my uncle, my brothers."

"But we won't lie about it. Even if they throw money at our feet, we will continue to tell the truth."

From Our Own Correspondent was broadcast on Thursday, 16 October, 2008 at 1100 BST on BBC Radio 4. Please check the programme schedules for World Service transmission times.

http://news.bbc.co.uk/1/hi/programmes/f ... 672228.stm
. is it a wise man, who knows that he is not wise
. it's good to have cynicism but not be cynical
. the more truth you live with, in your life, the stronger you are
. intelligence is merely an attitude to knowledge and learning

Return to Religion and the Occult