Chris Millar – more commonly known as Rat Scabies – is the drummer and founder of the seminal English punk band, The Damned. He’s also a Rennes-le-Château aficionado and Grail hero . 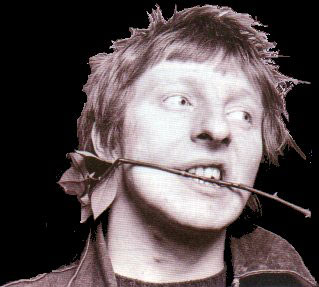 New Rose: A young Rat Scabies – the Godfather of Punk

Yes – Grail hero. Rat, as he is known by his friends, is the hero of Christopher Dawes' refreshingly trippy Rennes-le-Château road-trip adventure yarn – Rat Scabies and the Holy Grail. 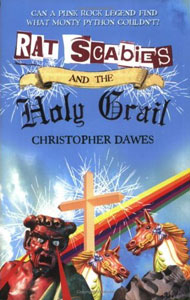 The book chronicles the exploits of Rat and his Brentford neighbour, ex-Melody Maker reporter and Brentford Football Club fanatic, Christopher Dawes. Together, the intrepid explores investigate Rennes-le-Château, only to uncover more lunacy than legend, and more trouble than treasure.

One could say that Rennes-le-Château is in Rats blood, for his parents, John and Joy Millar, are the founders of the UK based Saunière Society: “a loose organization of diverse individuals formed to pursue the ideas and objects first popularized by Henry Lincoln, and has as its primary object, an endeavour to seek out the truth."

5. Tell us about your recent trip to Rennes-le-Château with your parents and the Saunière Society. Were you not accompanied by the Messiah (David Shayler) himself?

He’s very vibrant and has a lot of charisma, which I felt unbalanced the yin and the yang of the tour as it were, and I soon realized that if he was indeed the Messiah then we needed a representative of what David would call the dark side.

In short, I realized that if he was the Messiah then I had to be the anti-Christ. 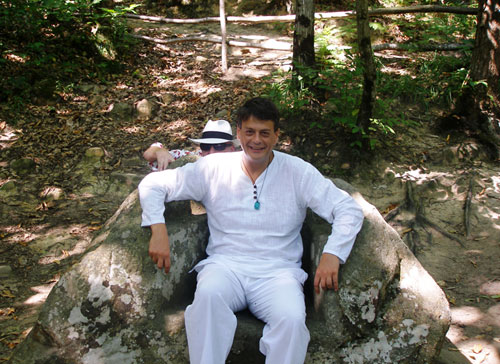 Rat with David Shayler at the Devils Chair: The Anti-Christ and the Messiah
Cool. Who was more convincing?

I was. Let’s just say I wasn’t convinced, but then being the spawn of Satan I wouldn’t be.

Of course. So what did he think of Rennes-le-Château?

Well he said he’d solved the whole thing, which was quite good of him.

Really? Did he say what the mystery was in the end?

Well, if you insist …His opening salvo was ‘I am Christ, I am the Messiah and what’s more I can prove it!’

Well not to me he didn’t. His first point of reference is the Bible Code and with his decoding he gets something like ‘King David Shaylot’, and to be honest if you apply the Bible Code to Moby Dick you’ll get just as coherent answers, if not more so.

6. You once drove David to Scotland, where he was schedule to speak at a Saunière Society meeting. Tell us, what that was like?

I know - but tell me again please!

Well it began with me falling into his cellar. It was very weird. I’ve searched for reasons as to why he’d want to kill me. I have…

Literally, I walked through the door and it was ‘hiya, I’ve come to take you to Edinburgh’, and I kind of stepped inside and the next thing I knew I had this incredibly, pleasant sensation of floating and falling. It must have only lasted one or two seconds. I slammed my back into the staircase and was kind of hanging upside in this totally surreal moment. Then we drove to Edinburgh where I was anointed by every witchy type in the building with all sorts of smelly stuff which actually did my back quite a lot of good, but I think the wine did just as much.

The whole reason I was picking David up in the first place was because he had two cars tampered with and he won’t drive. That’s why I’d been nominated by my dad as the driver. So we finished the meeting and there was somebody that hadn’t attended the meeting that had been hanging around in the bar and who was causing a certain amount of paranoia with David and some of the others. And of course as we drove back to London the following day the car brakes suddenly lock up and we veered into the other side of the road and we had to get it fixed.

So someone had cut the brakes?

Well, it was the hand-brake. It had a calliper inside the brake drum which had sheared off. It was classic as well, because when I took it to my guy who always fixes the car he said ‘well what happened?’ So I told him it was the brake calliper, and he said ‘but they never go’, so it may have well been a murder attempt on David. 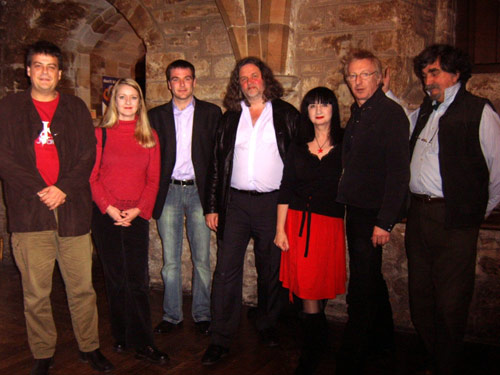 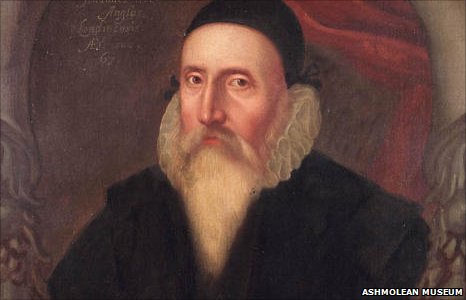 Musician Damon Albarn's latest work has been inspired by an Elizabethan mastermind. But who was Dr John Dee?

There are not many people alive who could pull off being an influential political adviser, a mathematician and scientist, and a magician and mystic all at the same time.
But during the reign of Elizabeth I, Dr John Dee was such a man - an influential polymath who got some of his information from a seance and a crystal ball. 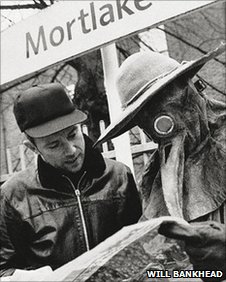 Damon Albarn has been getting into the life of Elizabethans

Now, the purported inspiration for Shakespeare's enigmatic magician Prospero in The Tempest and Marlowe's devil-dealing Doctor Faustus has taken someone else captive with his mystical charms.

Blur and Gorillaz frontman Damon Albarn is writing and performing the music for Dr Dee: An English Opera, which opens in July as part of the Manchester International Festival.

"I'm not walking around in a ruff and tights," he says in an interview with Radio 4's John Wilson, but he admits a profound affinity with the cosmic Elizabethan mastermind.


"I've got a really strange emotional connection - it really gets to me, that haunted, magical England.

"It's something that really stirs me in an irrational way."

Indeed, to the modern mind, many of Dee's ideas could be construed as somewhat irrational.

"He was working at a time when there was considerable uncertainty about what you could know was true," explains Benjamin Woolley, a historian whose biography of Dee has in part inspired Albarn to embark on his musical project.

Following Henry VIII's separation from the Catholic Church, the landscape of ideas in Europe was in a state of flux.

Renaissance men such as Dr Dee were suddenly free to speculate about material and mystical possibilities.

Dee's mission, said the historian, was to find a unifying principle, a theory of everything which united ideas of Arabic algebra - infusing into Europe from the Muslim conquest of Spain - as well as astrology, mysticism and the wisdom of ancient traditions being unearthed by Renaissance scholars.

His belief was that a universal language could be found, the language of God and the builders of the Tower of Babel, "a language that would embody the truth of the Universe", Mr Woolley said.

He designed a hieroglyph, the Monas Hieroglyphica, which embodied this unifying principle - the astrological symbols united in one form.

But in an age where knowledge was not divided into set subjects as it is today, Dee was also influential in the development of cartography, training navigators who set out on voyages of discovery and working on the division of the natural world into species.

In his library he collected Renaissance texts and the histories of Britain, described by Benjamin Woolley as Britain's first national archive, "a cosmos in the cottage", in which texts which may not have survived without him were squirrelled away and studied.

John Dee in Literature
Dr Dee is believed to be the inspiration for Shakespeare's character Prospero
In Philippa Gregory's The Queen's Fool, Dee helps the eponymous heroine see the future with a special mirror
HP Lovecraft's horror stories credit John Dee with translating the occult book, The Necronomicon into English
John Dee searches for King Arthur's remains in Phil Rickman's historical mystery, The Bones of Avalon

He was a powerful adviser to Queen Elizabeth I, credited by Mr Woolley as coming up with the idea of a British empire after the Spanish conquest of South America, and a spymaster too, setting up a network of informants to crack Catholic codes in the military build-up before the Armada.

"He was one of the last great free thinkers, because science and magic had yet to part company," says Rufus Norris, the opera's director.

But his life was not just one of esoteric and political ideas.

"The man who at the time knew more than anyone else, certainly in Britain, managed to mess up the things closest at home," says Mr Norris.

Perhaps the strangest episode in Dr Dee's life was when, with his reputation under fire over political intrigue and espionage in the English court, he set out across Europe with Edward Kelley, an earless mystic who believed he could talk to angels with the help of a crystal ball.

The relationship fell apart when Dr Dee lost confidence in Edward Kelley's announcement that the angels had told the two they must share everything, including their wives, but not before his wife had become pregnant with what was believed to be Edward Kelley's child.

This concoction of Renaissance ideas and a human story is being brought to life with an eclectic musical composition - featuring medieval instruments, West African drummer Tony Allen, and Damon Albarn's unmistakable vocals.

For Damon Albarn, his performance on stage will echo one of John Dee's own obsessions - a book he unearthed in Europe called the Steganographia, which Dee believed offered a mystical form of instant communication across time and space.

The opera, Albarn says, centres on the period at the end of Elizabeth I's reign and the start of James I's, at the beginning of "the puritanical purge of all of those esoteric ideas in England".

"I exist towards the end of another Elizabeth's reign, her sort of golden twilight years. There is a real connection.

"On stage I am here now, but I am sort of travelling."

So this moment in English history, and the character of John Dee - who Albarn believes has been "whitewashed" out of history - means more than just a useful device for an entertaining evening.

"It's just amazing how much colour there is in his ideas. Just imagine the English now if we had kept that spirit in our hearts."

I've read the Rat Scabies book. Brentford, you say?
Those who dream by night in the dusty recesses of their minds wake in the day to find that all was vanity; but the dreamers of the day are dangerous men, for they may act their dream with open eyes, and make it possible. -- Lawrence of Arabia

Return to Religion and the Occult