From my very best deep throat journo pal who last week interviewed several former COBRA ( UK security/intelligence committee on terrorism) members in London: allegations that much of the initial financing of the recent London terrorism attacks is directly connected to a UK/Ghanaian cocaine cartel that laundered much of its initial financial successes in the 1990s into the UK property market. And which now claims it is owed some $50 million in expenses following the abortive Equatorial Guinea Coup Plot last year which saw Simon Mann jailed and Mark Thatcher convicted of conspiracy and fined some £250,000......<br><br>The gist:<br>An alleged third terrorists cell is being sought in London after the 7/7 tube/bus bombings and the thwarted 21/7 attacks. This third cell is believed to be have been under surveillance in a MoD operation into an alleged terrorism training camp in North Wales which was busted in 2002 but which then relocated to another remote agricultural region of the principality.<br><br>Its members are believed to have been bankrolled by a gang involved in a thwarted Ghanaian $140million cocaine smuggling gang as reported in January 2003 - and in particular by ringleader David Logan. See:<br><br><!--EZCODE AUTOLINK START--><a href="http://www.ghanapolice.org/news/cocaine_ares_0801004.htm">www.ghanapolice.org/news/...801004.htm</a><!--EZCODE AUTOLINK END--><br><br>And that Jeffrey Archer's son James Archer (named in the Mark Thatcher coup plot trial as one of the financiers of the failed coup) was the main financial backer of Logan as well as a major player in this Ghanaian clique following huge personal losses after being fired from his City bank job when caught trying to cheat the Swedish Stock Exchange on an insider dealing rap. <br><br>The initials 'JA' were linked to a numbered bank account which was cited as being part of the £74,000 financing contribution to the Equatorial Guinea coup plot logistics.<br><br>Guardian link on EG Coup Plot:<br><!--EZCODE AUTOLINK START--><a href="http://www.guardian.co.uk/equatorialguinea/0,15013,1291350,00.html">www.guardian.co.uk/equato...50,00.html</a><!--EZCODE AUTOLINK END--><br><br>The trial of Simon Mann and of Mark Thatcher made much of Mann's alleged coup plot pals 'Scratcher' and 'Smelly'. Scratcher turned out to have been a pet name for Mark Thatcher. And the UK press widely reported that 'Smelly' must be Lebanese-born Chelsea resident Mr-Fixit-Man Eli Callil. <br><br>However, 'Smelly' may not refer to Callil but to GELLI. Alex Gelli, that is. A London resident, former terrorist thug who worked for Robert Maxwell and Vladimir Putin in the 1980s/early 1990s and is personally resonsible for a huge chunk of a London property fraud estimated as being worth in excess of £250 million, laundered via HSBC Bank after the December 1999 suspicious death in Monaco of Republic Bank CEO/main shareholder Edmond Safra.<br><br>And a great-nephew of Licio Gelli, curently in a Rome slammer awaiting the October resumption of the 'God's Banker' murder trial of Roberto Calvi.<br><br>EndGist.<br><br>The BBC today reported that the UK terror threat had been downgraded from 'imminent' to 'severe general'.....but that the cops were still on the highest level of alert.<br><br>EDIT:<br> See:<br>Fury as officials secretly downgrade terror threat<br><br><!--EZCODE AUTOLINK START--><a href="http://www.telegraph.co.uk/news/main.jhtml?xml=/news/2005/08/21/nterr21.xml&sSheet=/news/2005/08/21/ixnewstop.html">www.telegraph.co.uk/news/...wstop.html</a><!--EZCODE AUTOLINK END--><br><br> <br> <br> <br><br> <p></p><i>Edited by: <A HREF=http://p097.ezboard.com/brigorousintuition.showUserPublicProfile?gid=emad@rigorousintuition>emad</A> at: 8/21/05 11:28 am<br></i>

Weird little one. Sounds like Obiang is holding some sort of sword over Mann's head, or has bought him. Not that it's necessarily false though. Bourdon hates Obiang, and it's the kind of place Soros would consider in need of intervention.

Former British mercenary Simon Mann, who led a failed coup attempt in Equatorial Guinea in 2004, has accused US billionaire George Soros of plotting to overthrow the country's government.

He said he had warned President Teodoro Obiang Nguema, Africa's longest serving leader, of the alleged plan in 2011.

But he said he did not have any proof, and Mr Soros has not yet commented.

Simon Mann made the remarks as he was testifying on behalf of Mr Obiang's son at a high-profile trial in Paris.

Teodorin Obiang Nguema is accused of using public money to fund his jetset lifestyle in France.

Simon Mann, 65, a former commando and businessman, was arrested in Zimbabwe in 2004 and extradited four years later to Equatorial Guinea, where he was sentenced to 34 years in prison.

But one year later he was released after being pardoned by Mr Obiang.

In his testimony in a Paris court, he also accused William Bourdon, a lawyer for the anti-corruption NGO Transparency International, of being part of the alleged plot, as well as exiled opposition leader Severo Moto Nsa and Lebanese businessman Ely Khalil.

Both Mr Moto and Mr Khalil were involved in the failed coup attempt of 2004, which sought to install Mr Moto as president of the oil-rich West African country.
"I explained to the president it [the coup] could be by any means," he told the court. "They were looking at all options, including legal."

However, he said he could not "prove" his claim, saying: "I don't have written evidence."

When he was asked if he had been paid to give his testimony, he said he only had his expenses covered.

Mr Bourdon, who is representing civil plaintiffs in the case against the president's son on behalf of Transparency International France, said the allegations were "extremely grave", saying that Simon Mann "had plumbed the depths of filth." 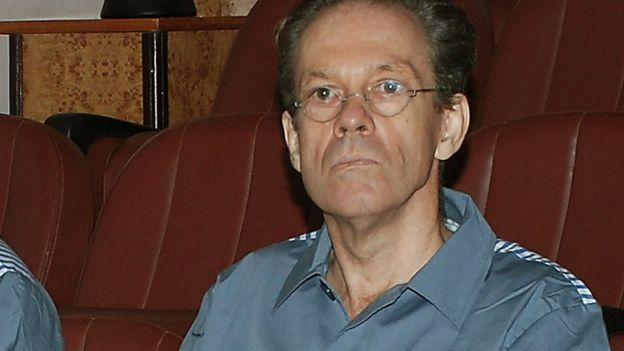 Outside the court, Simon Mann said that the high-profile trial of Teodorin Obiang Nguema was an attempt to "destabilise and overthrow" the "recognised and legitimate regime" of Equatorial Guinea.

Teodorin Obiang Nguema, who is also the country's vice-president, is accused of buying a mansion and sports cars in France with a fortune amassed from public funds.

His six-storey Paris villa, estimated to be worth more than $100m (£80m), is located on Avenue Foch, in one the most prestigious neighbourhoods of the French capital. It reportedly boasts a cinema, spa, hair salon and taps covered in gold leaf.

Mr Obiang, who was not in court, denies the allegations. Equatorial Guinea has questioned France's right to put him on trial, arguing Mr Obiang has diplomatic immunity.