So, no one supports your cause? No problem. You can hire supporters- even protesters. A company started last October by 22-year-old Adam Swart provides just this service. In a telephone interview I spoke with Swart about his new found success. “I came up with the idea on a visit to Estonia,” says Swart. At the airport, Swart says he saw a man who was being swarmed by a crowd of excited onlookers. He tells me, “I thought- Why can’t I have that kind of attention?” And so, Swart’s company, Crowds on Demand, was born.

Swart says that business is doing extremely well. According to their website, their office is located in a swanky downtown LA office suite. He says his biggest client so far was a $10k contract, but he would not disclose the client. Not bad for a 22-year-old kid. “We do most of our business through word of mouth. We are able to provide our customers with top-notch service, so they spread the word to other potential clients,” says Swart.

Swart says the company does a lot of work in the political realm. He continues to say that they also do work for non-profits and private industries. He cites one recent client, an online marketing group named Virurl, that his company was hired for. According to Swart, having protesters at a convention where Virurl was present increased the company’s revenues by 500%. Apparently the protesters had been hired by Virurl to act against a form of marketing, and Virurl provided a solution to this avenue of marketing. Multiple VIPs were at the convention, and Virurl stuck out when its employees began to show the solution to the protesters concerns to VIPs in the marketing industry.

Swart says that he pays his employees around $15/hour and has a solid staff. He continues, “We are operational in 5 major cities. However, if a big event is proposed then we have been known to travel in order to fulfill our customers demands. We’ve done business in New York, Washington D.C. and Vegas.”

He says that there are many critics, but he enjoys what he does and feels that he is contributing to society. When asked if he ever turns an organization away because of an ideological difference he says that clients are almost never turned away unless they are requesting his company breaks the law.

When I asked Swart whether his company was catering to more liberal, or conservative clients he was unwilling to give a clear answer. Swart seemed to me like a shining star of free market capitalism, so I asked him where he stood on it.

“I’m a huge fan of free market capitalism! I believe that the government must foster business and encourage innovation. Government needs to encourage people to innovate… Our government plays a vital role in job production and innovation of technology.”

Although Swart’s understanding of the free market is off-base, I feel perhaps he will develop a greater understanding of it as he matures. Whether you agree with his tactics or not- it is clear that there was a demand, and this young man supplied it.

Horribly written but quite interesting nonetheless. I would imagine a "22 year old kid from LA" is not the first mover in this marketplace and I'm sure we can find a dozen other examples of PR firms offering similar "instant astro-turf" solutions.

Grassroots Campaigns is a company [1] that does strategic consulting, and fund raising for humanitarian and progressive causes and political organizations. Grassroots Campaigns employs thousands of workers to generate small-donor contributions, increase visibility, and expand the membership base for a number of progressive groups, issues ,and campaigns. Headquartered in Boston Massachusetts, the company was founded in December 2003 by a small team of experienced organizers who specialized in grassroots-level political and public interest organizing with groups like the Public Interest Research Group.
http://en.wikipedia.org/wiki/Grassroots_Campaigns,_Inc.

As innovative as a whorehouse - and almost as old an idea!
We meet at the borders of our being, we dream something of each others reality. - Harvey of R.I.

Yeah, my first thought when I saw the headline was "MoveOn must be hard up for cash, damn!"

The lucrative business of crowds for hire

(CNN)Next time you're watching a campaign rally for a politician, or a glitzy premiere, take a close look at the enthusiastic faces waving banners at the front.

There is a good chance that some are paid performers. If they are, it is likely that one Adam Swart put them there.

His start-up Crowds on Demand, launched in 2012, has established itself as a popular resource for any party in need of guests.

"The company started as a way for up-and-coming celebrities to get more attention," explains Swart, a UCLA political science graduate. "If you are surrounded with bodyguards and paparazzi you are taken more seriously."

"Then we started fielding political requests - to provide crowds for world leaders and U..S political candidates at federal, state, and local level, or to conduct rallies and protests in support or opposition to an issue."

The company repertoire has now expanded to cover product launches, PR stunts, and social justice movements. One popular side-line is using crowds to apply pressure to one side - or even both - of a corporate litigation dispute. 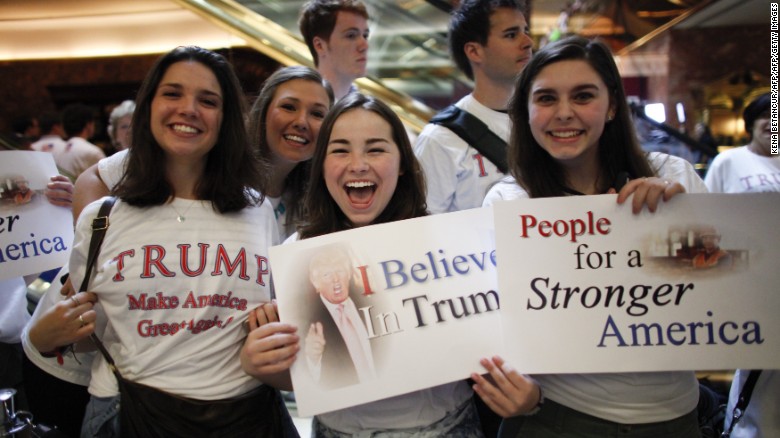 Supporters of Donald Trump before he announced his bid for presidency at the Trump Tower on June 16
2015. It later emerged that actors were hired to cheer the announcement


Swart claims the business has "more than doubled" in size each year, and can now call on tens of thousands of performers to cover several events each day, in dozens of cities across the U.S.

The next step is going global.

"We get a lot of requests to do international events... but we have to make sure we are operating within all applicable laws," says Swart. "Many countries don't have the same protection of assembly."

The CEO hopes to begin with the U.K., Dubai and India within 18 months, testing the waters with uncontroversial celebrity events.

Crowds you can control
The return on investment for clients is variable, but Swart is confident his services offer value.

"When a clients spends $10,000 on a protest and wins a $20 million settlement, that's a clear return on investment," says the entrepreneur.

"Other situations are harder to decipher -- it may be more 'can we shift the media narrative?' 'Did we get more press coverage or photo opportunities?' There are many ways to judge our services and their effectiveness - some quantitative, other qualitative."

The role of crowd members is carefully calibrated. Recruits are generally actors, who are expected be enthusiastic, but not so zealous as to risk arrest. Critically, they must look and sound authentic.

"They almost always hold signs and chant, and sometimes talk to media on behalf of the event," says Swart.

Employees also sign non-disclosure forms that protect the client's anonymity, to avoid the embarrassment of their paying for support coming to light.

In rare cases where the practice has been exposed, such as with Donald Trump's hiring of supporters, it has been heavily criticized.

But Swart is comfortable with the ethics of his business:

"We didn't invent this," the entrepreneur says. "People are just looking for ways to spread a message in an unconventional, interesting and effective way. Before this you could spend $100,000 to put an ad in the Washington Post. Now you can spend a tenth of that to get right in front of people."

Tip of the iceberg
The business model is spreading. Ukrainian company Easycrowd predates Swart's company, while Crowds for Rent and Rent a Crowd were recently launched in the U.S. and U.K. respectively.

These novel companies represent only the most visible feature of a sprawling landscape of manufactured support.

"There are similar types of consulting firms that provide a vast menu of 'grassroots' services," says Dr. Edward Walker, Professor of Sociology at UCLA and author of Grassroots for Hire.

"These include mass letter-writing or emailing, ghostwriting blog posts, locating data on likely sympathizers for your cause... even creating whole new 'front' or 'third party' organizations to serve as a mouthpiece for the campaign's funder."

"Considering all of the PR and lobbying firms that do what I call 'grassroots for hire'... there are hundreds of such firms across the country. By my estimate, around 40% of the Fortune 500 appears on the client list of at least one such firm."

Walker sees technology as a driving influence of the trend, citing Uber's use of its network to pressure New York Mayor Bill De Blasio -- with a 'De Blasio button' on its app -- as an example of commercial companies' increasing ability to mobilize users to campaign on their behalf.

Another driver of the business is the growing value of crowds in the age of mass media.

"The appearance of grassroots support is critical for gaining attention on social media," says Walker. "It is critical to have an enthusiast community that can support your cause and act as ambassadors for it."

The Professor adds that companies risk reputation damage if their use of paid supporters is unmasked, but the practice seems set to grow, particularly in the arena of politics.

"The rise of campaign finance makes it possible, (and) the massive expansion of the PR industry," says Lisa Graves of monitoring group PR Watch. "As more big money is injected into campaigns... these efforts to deceive the public with fake crowds will continue to expand."

For entrepreneurs such as Swart, the current surge in demand for hired crowds offers boundless opportunity.

But as the industry grows, so too will the challenge of remaining hidden.

I watched one of these done years ago at a speech Hillary gave. They rolled in two buses of people and parked the buses behind the building out of site. Most of them had on the same shirts and signs. They all clammer out of the bus looking tired and not all that enthusiastic. They stood in front of the building cheering for Hillary.

On the other side of the street was a much larger authentic group of mad people protesting and heckling. This group was not even allowed to cross the street.

When everybody left and it showed up on the news it didn't look anything like what I actually witnessed.
"A mind stretched by a new idea can never return to it's original dimensions." Oliver Wendell Holmes

Chinese supporters perhaps not exactly what they seem

Just how spontaneous was the spontaneous show of affection for Chinese President Xi Jinping? Mark Urban makes a revealing discovery... boxes of pro-China merchandise shipped in by the Chinese Embassy. More from Mark on the programme at 22:30 on BBC Two

Users browsing this forum: No registered users and 3 guests