bubblefunk wrote:"Disco DID make itself. Ever see a drum machine?" said Fred.

Fred, there were no drum machines playing that stuff in the 70s. Just some seriously talented and (relatively) egoless drummers willing to subjugate themselves to the beat. Anti-Neal Pearts, if you will.

And your description of what happens when you "strum an E chord on cocaine" is so far off the mark as to make me believe you have no experience with the substance! If anything, it makes you want to write a 4-LP concept album about that E chord, an album you'll never live up to the promise of, and that you will abandon halfway through, after spending countless dollars in the studio, and countless dollars on flake trying to recreate your original idea. Steve Stills' MANASSAS album was really his high mark, I think the guy's kind of a hack, but come on. There were some really great songs on that sucker.

I've done coke a few times, and gigged on it once. It was a very delusional experience, to say the least. For certain other folks I played with, it was the norm. They usually played and sang shite while thinking they could do no wrong.

Where did I say there was anything wrong with the Manassas album? It was great. All subsequent albums from Mr. Stills were lame, though. The poor guy was so sopped, he suffered from seizures, and labored under the delusion that he had been in Viet Nam with "special forces".

Finally!
Inside The LC: The Strange but Mostly True Story of Laurel Canyon and the Birth of the Hippie Generation. Part XVII

I think I'll go digging for SOME confirmation on the D. Carradine 'event' ending Part 17. That is so fucked up.

It only makes me think that Roman Polanski's crime could be forgotten, if not forgiven, owing to the customs of the county.
Zen horse

norton ash wrote:I think I'll go digging for SOME confirmation on the D. Carradine 'event' ending Part 17. That is so fucked up.

That's something I also had to look up. A Guardian article, hosted at Geneclark.com (I don't think it is an official site), says:

The cause was given as a heart attack, and technically that's what it was. But the kind of behaviour that had chauffeured him to death's door, pursued him to the funeral viewing. There, actor David Carradine drunkenly shook the corpse by the lapels of its jacket and howled, "You fucked the girl and she was only..." before being dragged off by security guards.

But some guy on a boxing forum who claims to have been at the funeral says:

Suddenly in the middle of the service a massively drunken Carradine burst in waving his arms & screaming & yelling at the quite & very dead Gene Clark.

He rushed up to the casket grabbed dead Gene by the lapels started lifting him up & slamming him down all the time yeling "Gene! You sunava bitch! How could you die on me, you bastard!"

After what seemed like an eternity but wasn't, he let go & weeping & moaning he stumbled out of the chapel....

The connection has timed out
The server at www.davesweb.cnchost.com is taking too long to respond.

You can find mirrors of the whole series around, too...

Some of the pictures won't work when dave's site is down

I would urge people to look around for other mirrors than the SOTT link given above.

Signs Of The Times is a front for the dangerous cyber-cult of Laura Knight-Jadczyk, who mixes valid conspiracy material with racism and cosmic debris and then uses it all to manipulate the minds of the people that she can reel in with this bait...

Yeah, it's the only full mirror I could find

La Montaña Sagrada (The Holy Mountain, reissued as The Sacred Mountain) is a 1973 cult film directed by Alejandro Jodorowsky who also participated as actor, composer, set designer, and costume designer. The film was produced by The Beatles manager Allen Klein of ABKCO after Jodorowsky scored an underground phenomenon with El Topo and the acclaim of both John Lennon and George Harrison (Lennon and Yoko Ono put up production money). It was shown at various international film festivals in 1973, including Cannes,[1] and limited screenings in New York and San Francisco. However the film was never given wide release until 2007, when a restored print toured the United States, screening with El Topo, and released in DVD format from May 1. The film contains nudity, graphic depictions of animal slaughter and gore.[2]

This belongs here.
Be kind - it costs nothing. ~ Maddy ~

Like "Juliette Of The Spirits" , I feel like a ton of '80's videos ripped-off some of these images!

Marilyn Manson blatantly did on many of his videos.

The Alchemist | Alejandro Jodorowsky in 'The Holy Mountain', one of Manson and the band's admitted favorite, highly influential film. 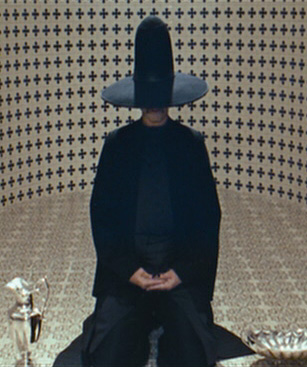 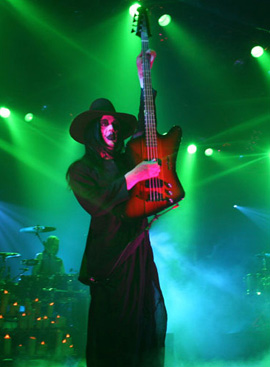 Excellent discussion with Dave McGowan and pics of Laurel Canyon.

I would like to think that Pamela Des Barres' glorious 1987 romp I'm With The Band: Confessions of a Groupie requires no introduction other than that offered in the foreword by Dave Navarro (!), but on the off-chance you're a young Amish person enjoying the freedom of Rumspringa, this is a super-famous memoir written by a super-foxy woman with very few personal boundaries and an enduring love of the popular rock and/or roll music. Who boffed a lot of singers. And bass players. And roadies.

If you're going to write a memoir about screwing your way through two decades (and you should! Send it to me!), the only appropriate way to couch it is NO REGRETS. Otherwise, you're either Larry Kramer (not that there's anything wrong with that—condom up!—but he's not making it into Classic Trash), or, like, Dr. Laura. No one wants that. Buzzzzkill.

No, we want AUNTIE MAME, you know? Go whole-hog! Compare yourself to Anaïs Nin! (Not everything Jewel did was bad, okay?) Frequently use the phrase "pioneer," as though you and Pa and Laura and your china shepherdess were plowing through the Rolling Stones like so many fields.

Do that, and we'll read your book.

Now, obviously, you want to know who she hooked up with. Let me help. Captain Beefheart (just a hand job), Davy Jones's stand-in on The Monkees (felt up her tits), Bobby Beausoleil (of Manson Family fame), Jim Morrison (made out extensively while huffing Trimar, that stuff that set the lake on fire in A Civil Action), Jimi Hendrix's bass player (almost relieved her of her virginity), Nick St. Nicholas (Steppenwolf bassist, SUCCESSFULLY relieved her of her virginity), Frank Zappa (who hired her to babysit his kids), Tiny Tim (okay, they just played miniature hockey and ate candy bars, and he gave her the nickname "Miss Pamela"), everybody in the Flying Burrito Brothers EXCEPT Gram Parsons (which sent her into a brief religious mania), Jimmy Page, Mick Jagger (he also tried to get a three-way with her and Michelle Phillips the night after Altamont), Waylon Jennings, Robert Plant, Keith Moon, and... Don Johnson (who she cheated on with Keith Moon). Also, obviously, her eventual husband, but who gives a shit?

Okay, so, maybe Pamela has some daddy issues. But, c'mon, "[my daddy] looked just like Clark Gable, and disappeared on weekends to dig for gold way down deep in Mexico." I only read that sentence, and suddenly I wanted to let Jimmy Page slurp tequila out of my navel, you know? I also give her mad-props for including excessively cringe-worthy excerpts from her adolescent diaries, especially those based around her obsession with Paul McCartney:

February 10...Hello Diary, Paul, you are gear. Really Fab. Say chum, why are you so marvelous, luv? The most bloomin' idiot on earth is me cause I'm wild over you chap.

Right? This is a woman who fucked Mick Jagger. She's under no obligation to expose her teenage idiocy to our ridicule, and you have to love her for it. And you know she had pubes… because she tells us so! Good for you, Pamela!
...
Context-Free Excerpts From I'm With The Band

• "When I came to my extremely sensual senses, I was in the middle of a perfect backbend on Jim Morrison's tatty Oriental rug, my purple velvet minidress completely over my head, his redheaded girlfriend glaring down at me."

• "The GTOs hung around with an eleven-year-old beauty, Bart Baker, and though I had never been intimate with him, a couple of the girls confessed to heavy petting with the beautiful blond prepubescent."

• "I took mescaline and went to Disneyland."

And now your bi-weekly exhortation to delve deeply into the trash:

• Did you know that Tom Hanks tried to force DreamWorks to cast Rita Wilson as the mom in Almost Famous? Wouldn't that have been WEIRD?
• You are a TARDIS-owning Time Lord, and can have safe, unprotected sex with any musician from any time period or genre. Dish! Who's it going to be?
• Do you secretly wish you had, like, a crocheted bikini, or is that just me?
• Wait, HAVE any of you slept with famous musicians? Tell us in code, like "let's just say he shagged like a Mountain Goat." Okay, I'm not exactly a Windtalker, over here.
• The two guys she decided were too weird to fuck: Dennis Hopper and Roman Polanski. Who's a dippy blonde now, America?
...
http://www.theawl.com/2011/05/lets-talk ... risons-rug

We’re in the upside down.

“Our music was far from political or antiwar … I never felt comfortable with political advocacy.”
John Phillips
“There were no political speeches or overt protest songs performed.”
John Phillips, discussing the Monterey Pop Festival, of which he was a key organizer


New installment has been posted.

Users browsing this forum: No registered users and 0 guests