I'm not sure I've ever seen a singular planned event as hyped as the "Royal wedding" happening this Friday in London, and I'm in America. My friends in Europe and especially the UK say the coverage is literally suffocating. Every rite and ritual is being obsessively rehearsed to the nth degree. American network coverage plans for it are going to be pretty massive as well: http://tvbythenumbers.zap2it.com/2011/0 ... ding/87287

But another "big wedding" is also going to happen that day. http://www.msnbc.msn.com/id/42742020/ns ... nce-space/
It's the day when the Gabby Gifford's husband Mark Kelly commands the final NASA shuttle mission, scheduled to dock with the International Space station where he'll be reunited with his identical twin(who heads the space station) Two twins meeting in space, made even more important to the media given the tale of recovery for Senator Giffords who sustained a shattering headshot wound in the January 8th
shooting rampage(chiefly among its victims, the girl born on 9/11/2001 and the judge) Obama and his family as well as Giffords will be watching on site in a private viewing area.

I'm curious what Secretsun, Goro Adachi and others will write of this day, because these two events are being made to be these hugely symbolic pivotal events.

EDIT: Just read that he gave her Princess Diana's ring. I won't go into it, but Im convinced Diana was killed(and not merely for explainable obvious political reasons)
April 29th is the 119th day of the year, mirror image of 911. Just food for thought I guess
Last edited by 8bitagent on Sun Apr 24, 2011 10:42 pm, edited 3 times in total.
"Do you know who I am? I am the arm, and I sound like this..."-man from another place, twin peaks fire walk with me

You're all being irradiated by a nuclear meltdown in Japan.

We're using your tax dollars to slaughter people for their oil.

Please direct your attention to the royal wedding.

I just want those two motherfuckers to hurry up and say I do, already. Seriously. Ugh!
Satire is a sort of glass, wherein beholders do generally discover everybody's face but their own.-- Jonathan Swift

When a true genius appears, you can know him by this sign: that all the dunces are in a confederacy against him. -- Jonathan Swift Oh, sorry, hung over. I forgot to add the three squares (more challenges) of the Aries to Capricorn (patriarchal energy/restrictions) in Pluto (karma, destruction, recreation) in the Fifth house (personal creativity/procreation). And Pluto quincunx (yes, more challenge!) Saturn as well.
Be kind - it costs nothing. ~ Maddy ~

Just saying. Not a good day.


Wasn't September 11th 2001 Saturn/Gemini and Pluto/Sagittarius? Which is curious as that means I I + <--{
"Do you know who I am? I am the arm, and I sound like this..."-man from another place, twin peaks fire walk with me

I have no idea. I never looked it up at all. I just looked this up because it was asked. Here's a website that has the chart up.
Be kind - it costs nothing. ~ Maddy ~

I would so totally not be doing anything on this day, by the way. Jesus. lol
Be kind - it costs nothing. ~ Maddy ~

I have heard only bits and pieces about this "royal wedding." I know little about it, and I suppose I don't listen to any media outlets that promote it; nevertheless, it doesn't seem like the media is engaging in any more whorish behavior than usual.
The real issue is that there is extremely low likelihood that the speculations of the untrained, on a topic almost pathologically riddled by dynamic considerations and feedback eﬀects, will oﬀer anything new.

I agree, Freemason. Media was just as bad about Diana's wedding.
Be kind - it costs nothing. ~ Maddy ~

Sarah Ferguson was supposed to die in her charity offices at the top of the Twin Towers.
This would've help Tony Blair bring the UK along for the oil war ride. This was telegraphed in a 1998 priming movie, 'Antz.' The 'wasps'... 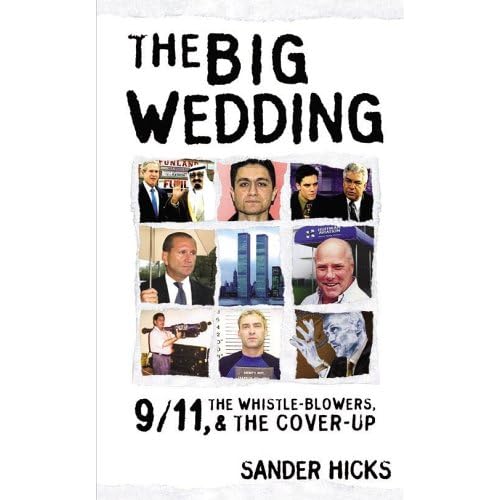 Soft Skull Press founder and 9/11 Commission Report critic Hicks argues for a "high degree of 9/11 foreknowledge on the part of the military/ intelligence complex" in this exhortation to disbelieve the Bush administration's "web of lies." The book marshals a bewildering array of sources and testimony—all filtered through Hicks's outraged sensibility—in an effort to implicate the U.S. government in the 9/11 attacks. Hicks identifies a compromised relationship between the CIA, the Bank of Credit and Commerce International and Pakistan's Inter-Services Intelligence, which, he asserts, has ties to al-Qaeda—thus the U.S. link to 9/11 and the government's relentless efforts to keep it concealed. Hicks relies on the research and testimony of numerous "rejected, truthful freelance mavericks," including Randy Glass, a jewelry con man and FBI informant who says he caught wind of threats to the World Trade Center in 1999; Daniel Hopsicker, an investigative journalist who argues that Mohammed Atta was a double agent; and Delmart Vreeland, a con man who claims he was a U.S. intelligence operative discredited for his 9/11 foreknowledge. Shocking exposé or gonzo conspiracy theory? This screed's credibility will depend on its readers' politics.

With just under a week to go until Kate Middleton and Prince William wed, news of the royal nuptials is inescapable. The dress, the (lack of) the ring, the guests, the security — it's all getting coverage. Here's one surprising piece of royal-wedding-related news, however: Only six percent of Americans really care about it.

Results from a new New York Times/CBS News poll showed that six percent of respondents are following news of the wedding "very closely," with an additional 22 percent admitting to following the media blitz "somewhat closely."

Unsurprisingly, more women than men are interested in the wedding, and older women are the largest group that plans to wake up early next Friday to watch the ceremony.

Mary Nygard told the Times that she would be hosting 27 other women for a wedding-watching party next week.

“We’re going to wear special hats, and some of us will wear tiaras,” Nygaard said. “It’s going to be so much fun.”

The U.S. media has alternated between obsessive coverage and negative opinion about the saturation. For example, MSNBC has aired details about the minutiae of the royal wedding, and released an iPad app for the event, while host Lawrence O'Donnell recently went on a tirade against the wedding.

http://www.rawstory.com/rawreplay/2011/04/lawrence-odonnell-enough-with-the-royal-wedding-remember-the-revolution/
By 1964 there were 1.5 million mobile phone users in the US

Re: The Big Wedding keyword hijacking

Hugh Manatee Wins wrote:Sarah Ferguson was supposed to die in her charity offices at the top of the Twin Towers.
This would've help Tony Blair bring the UK along for the oil war ride. This was telegraphed in a 1998 priming movie, 'Antz.' The 'wasps'...

Have you just been waiting for the next big wedding to post this?
Those who dream by night in the dusty recesses of their minds wake in the day to find that all was vanity; but the dreamers of the day are dangerous men, for they may act their dream with open eyes, and make it possible. -- Lawrence of Arabia

Hey, does this mean Hugh approves of "The Big Wedding" book, even though it follows the inquiry of the "hijackers"? I personally have always found the lore of al Qaeda and the hijackers a fascinating read, so I highly recommend the book along with Crossing the Rubicon and Welcome to Terrorland. Sander Hicks, great kid. They even made a movie about him(err, two I think)

Anyways, while a polled 6% of Americans may give a flying squirrel about the "royal wedding", in Europe it's bonkers with the level of intense focus. In America the "big wedding" is the narrative of Giffords/Kelly/NASA, which has heavy Kubrickian themes.

Now I mentioned to a friend I discuss some of this stuff with now and then, and he said "you think they're gonna try and pull something at the royal wedding?". I said major shocking events never ever happen when you expect them too. Think back to every major game changer or shocking event, totally out of the blue. I said that just the act of these events, the symbolism and the collective world egregore of people's emotions is enough for these "workings". Like the engineered Obama "win" night of 2008 to counter the "-777" dow drop.

I know most of you laugh or dismiss the idea that there are deliberate "occult" elements to major events or parapolitical crimes, and I totally understand the idea of demeaning the importance of provable real world crimes. I used to cringe and laugh at the idea, though certain patterns emerge that are hard to dismiss; and I see it more like police investigators realizing certain killers leave deliberate esoteric calling cards or symbolism(like Zodiac, or Son of Sam) I used to laugh at the mere idea of it, until I realized how in your face some of this stuff is. 11, 77, A.A.93, 175(9/11), -777(2008 financial crash), 13/31(Princess Diana), 11:11:11 1918(WW1), 33 degree/Hindu ritual(Oppenheimer's Trinity Test), left line broken Pentagram(downtown DC/White House)

I don't know how they do it, I don't want to know how they do it...and I wonder if even "they" are even aware of the true level of things going on, or if it's just all the universe's synchronicity...but I do feel there are things in this world and past that go beyond mere corporate contracts, oil and that sort of things. But knowing how obsessed with details in symbolism, mass emotion, astrology(9/11 was Saturn/Gemini vs Pluto/Sagittarius which is literally an arrow flying into two pillars) and things I can't comprehend; I would not be surprised if the royal wedding/NASA launch are greatly significant to whatever ill begotten faith they ascribe to.
"Do you know who I am? I am the arm, and I sound like this..."-man from another place, twin peaks fire walk with me