Yeah, I just saw this the other day and spent hours looking through other WINEP videos on Youtube - just skipping to the Clawson parts and seeing if he had any other impressive performances worth noting. I find it funny that many of the videos of talks uploaded to their channel have 300 or 400 views, absurdly low. You could get a similar level of views by just posting yourself talking to a webcam in a bedroom.

Poignant video posted by "anonymous friends" and are suspicious about his death:

(I wonder if his family knows the cause of his death and if they have access to the autopsy report).
The greatest sin is to be unconscious. ~ Carl Jung

We may not choose the parameters of our destiny. But we give it its content. ~ Dag Hammarskjold 'Waymarks' 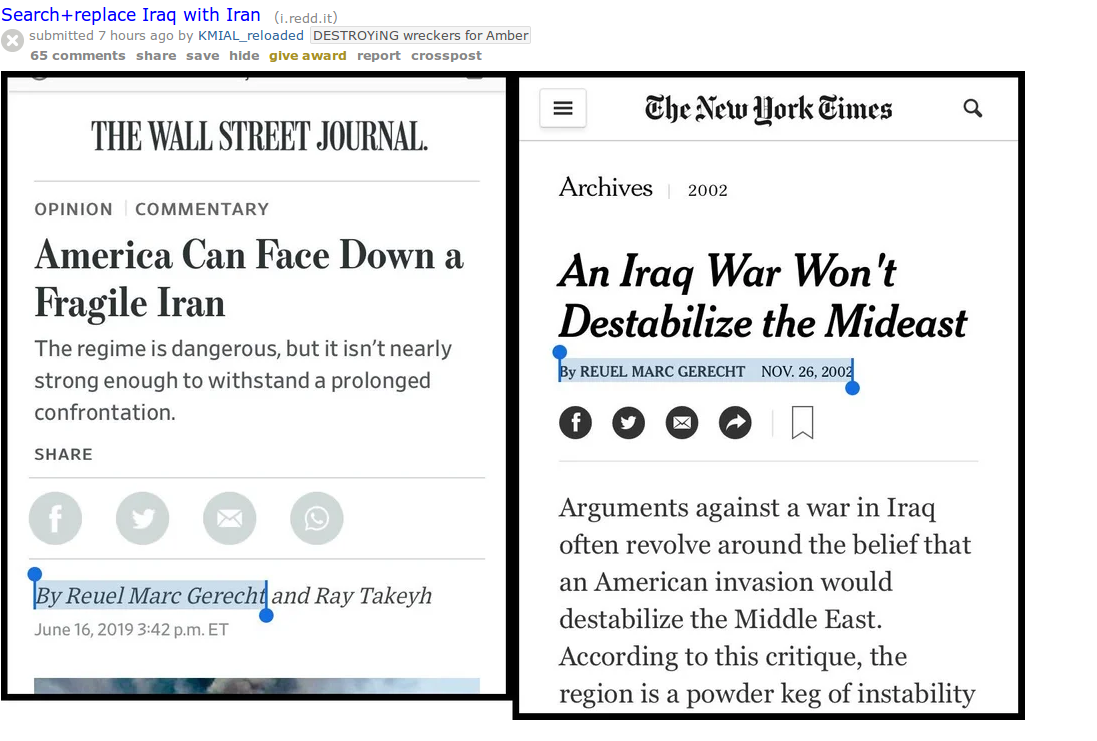 annual salary of a forensic anthropologist
If Barthes can forgive me, “What the public wants is the image of passion Justice, not passion Justice itself.”

June 17, 2019 Diplomatic sources at the UN headquarters in New York revealed to Maariv that they are assessing the United States' plans to carry out a tactical assault on Iran in response to the tanker attack in the Persian Gulf on Thursday.

U.S. to send 1,000 additional troops to the Middle East

June 18, 2019 / 8:38 AM - WASHINGTON (Reuters) - Acting U.S. Defense Secretary Patrick Shanahan announced on Monday the deployment of about 1,000 more troops to the Middle East for what he said were “defensive purposes,” citing concerns about a threat from Iran.

"Acting Secretary of Defense Patrick Shanahan, who has done a wonderful job, has decided
not to go forward with his confirmation process so that he can devote more time to his family"

https://www.nytimes.com/2019/06/18/us/p ... etary.html
"It seems to be what we have now is a political system which has essentially become, for the last thirty or forty years, a war on the human imagination."
(David Graeber)

Iranian Prof.- Why Would Iran Attack Tankers in the Gulf of Oman?!

https://www.youtube.com/watch?v=2nZs-u8CqZQ
goingundergroundRT
Published on Jun 17, 2019
We speak to Iranian Professor Seyed Mohammed Marandi on David Horowitz' allegations about Iran being medieval and barbaric as well as the Gulf of Oman tanker incident which Western powers such as the US and UK allege to be Iran's doing.

Bolton, the Iranian frogman and the lies go on... 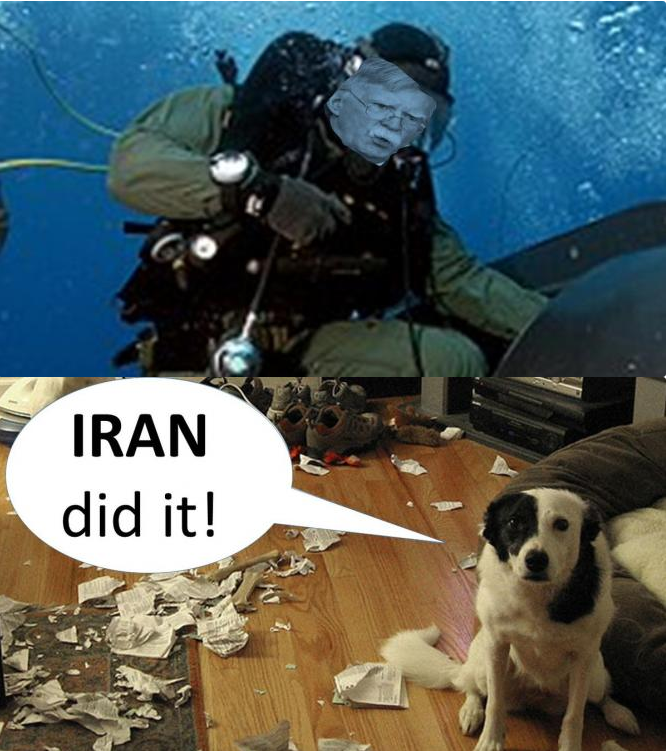 Iran’s state news agency said Thursday that the country’s military unit shot down a US drone flying over its airspace.

The Persian Gulf nation said the drone was struck down by the Revolutionary Guard when it entered Iranian airspace in southern Iran’s Hormozgan province.

The Revolutionary Guard called it a “spy” drone. It added that the drone was an RQ-4 Global Hawk.

A spokesman for US Central Command declined to comment when asked if an American drone was shot down.

However, the spokesman insisted that “there was no drone over Iranian territory.”

The RQ-4 Global Hawk is a high-altitude, unmanned aircraft with an integrated sensor suite to provide intelligence, surveillance and reconnaissance, according to Military.com.

The reported shoot-down took place amid increased tensions between Iran and the US.

The US military previously alleged Iran fired a missile at another drone last week after that drone responded to the attack on two oil tankers near the Gulf of Oman.

President Trump decided a year ago to withdraw America from Iran’s nuclear deal with world powers.

Lindsey Graham is a grotesque caricature. A murderous, angry, repressed, closeted gay man overseeing a vicious, omnivorous US empire and kow-towing to some very dangerous people who hate what he is.
-I don't like hoodlums.
-That's just a word, Marlowe. We have that kind of world. Two wars gave it to us and we are going to keep it.

Yup, Lindsey will be frothing...of course it was in international airspace...

US military drone shot down by missile in international airspace, US official says

A surface-to-air missile shot down a U.S. military drone in international airspace over the Strait of Hormuz, a U.S. official told NBC News Thursday morning.

The U.S. official said a US RQ-4 Global Hawk drone was shot down in international airspace above the Strait of Hormuz. It was not in Iranian airspace. The official said they consider this to be an unprovoked attack.

“The downing of the American drone was a clear message to America ... our borders are Iran’s red line and we will react strongly against any aggression,” Salami said. “Iran is not seeking war with any country, but we are fully prepared to defend Iran.”

A U.S. Central Command spokesperson later responded to the charges saying that “No U.S. drone was operating in Iranian airspace today.”

Will cooler heads prevail, the problem with 'hawks' is that seeking a kill prey is in their nature...

Deploying troops to the Persian Gulf risks igniting a powder keg in the troubled region where tension is mounting, the Russian Foreign Ministry has warned, advising Washington to stop “before it’s too late.”

Russia is hoping that the US buildup in the Middle East “won’t become a spark that creates a blaze,” Deputy Foreign Minister Sergey Ryabkov told reporters on Thursday. Otherwise, the situation will spiral out of control, he warned.

Destabilization is such a dangerous thing, especially in this region. Anyone who undertakes such actions too easily should stop and use common sense… before it is too late.

The warning comes as the US beefs up its assets in the Gulf. Just last month, the Pentagon deployed a battery of Patriot missiles, nuclear-capable bombers, and an aircraft carrier strike group to the area. Washington cited a growing threat from Tehran to justify the buildup, whereas Iran blamed the US for eroding its own security.

When it comes to starting wars, we don’t even bother to change the script anymore

Here we go again. Iran has not only shot down an American spy drone over the Strait of Hormuz, but refuses to feel bad about it.

Iran’s General Hossein Salami — one assumes this is a real person — said of the drone downing, “We are completely ready for the war. Today’s incident is a clear sign of this accurate message.”

We all know what this means. This aggression will not stand, man.

Depending on who’s doing the counting, the United States has attempted to overthrow foreign governments roughly 72 times since World War II. The script is often the same, and the Iran drama is following it. Go back through history and you’ll often see these elements:

Iran Downs US Spy Drone: Who's The Aggressor?

https://www.youtube.com/watch?v=XWVkZ3xbvdk
RonPaulLibertyReport
Streamed live 7 hours ago
The downing of a US spy drone near (or within) Iranian airspace has - conveniently for neocons - raised tension and further boxed in President Trump. Pressure on Trump for a military response to Iranian "aggression" will increase. Will he take the bait this time? Or will more such provocations be needed?

How ironic is it, that the bloated racist game show host movie star in control of America who loves humiliating Mexicans and "others" may also in a weird way be the only brakes the world has as a block toward all out war in the Middle East?(Syria was an all out war, but I mean World War 3)
https://www.cnn.com/2019/06/21/politics ... index.html
Trump abruptly calls off military strikes against Iran after approving them

Did NONE of the Neocon/Saudi/Israeli architects of the Iraq and Afghanistan invasion realize Tehran would be the one to end up being the biggest winner and turning both into de facto satellite states?

That Pat Buchanan isolationist stream in Trump seems more adamently against war than Clinton, Biden and Obama did in their action and posturing. In fact I remember when every single day in 2006 Alex Jones was convinced Bush and the neocons were going to false flag their way into a war with Iran and I even thought Bush would invade Iran. Now we see it happening in real time, and the Alex Jones style blowhards on the isolationist right are nowhere to be found to call out this neocon bullshit. Just a cult of personality as we saw at that disgusting Orlando rally last night.

The news is reporting Trump ok'd a Thursday night strike on Iran's military and then at the last minute pulled it back. Since Beirut have we ever seen the US literally go hard on Iran militarily? This is some nuts shit in recent weeks. Bolton, Pompeo, Graham and others are just salivating on tv and its clear Trump is like Darth Vader at the end of Jedi...evil yes, but conflicted. Iran allegedly downs America's $220 million dollar drone toy(thankfully noone was hurt) but this is the red line? I'm guessing we're going to see some real crazy game of chicken coming up. The LULZy wtf shit is that a few weeks ago the neo-neocons now in control of Trumps white house were insisting there's fresh evidence linking Iran to al Qaeda and 9/11. Yet even the mainstream media realized that's way too yellow cake for their their imagination.
Saudi Arabia and the neocon elements in the Trump regime seem obsessed with going on a full hot war with Iran and its satellite proxies, yet I imagine even Israel who dreams of wiping out Iran must be having some second thoughts.

MAYBE President Trump being a big weird easily distracted baby is a good thing...as we were looking at the neocons wanting to attack BOTH Iran and Venezuela as of late
https://www.businessinsider.com/trump-bored-of-venezuela-as-maduro-clings-to-power-report-2019-6
Trump is giving up on regime change in Venezuela because it's complicated and he got bored, report says
"Do you know who I am? I am the arm, and I sound like this..."-man from another place, twin peaks fire walk with me

8bitagent wrote:Bolton, Pompeo, Graham and others are just salivating on tv and its clear Trump is like Darth Vader at the end of Jedi...

or at the end of this very funny video (with apologies, but it's irresistably apt)...

Made with 100% all natural Trump sound bites.

Much does hinge on Trump alone; at the end of the day his orders rule. Glimmers of conscience are usually precluded organically in the narcissistic brain, so I'm skeptical about that possibility. Also, he's probably just confused a lot. Maybe they're planning something bigger than a few bombings.

Mainly, Trump strikes me as the "oppositional defiant syndrome" type—you know, the "don't tell me what to do" sort for whom even a helpful suggestion can represent a threat to their personal agency. Presumably, butt-kisser Stephen Miller and the other sycophants have learned to work around Trump's bruised psyche. But if someone like Bolton tells Trump what Trump ought to do, Trump will usually find a way to not do it (though he might later claim the idea as his own). As soon as Trump is tired of Bolton telling him what to do, he'll drop Bolton and find a new victim.</pop psych>
"It seems to be what we have now is a political system which has essentially become, for the last thirty or forty years, a war on the human imagination."
(David Graeber)

Users browsing this forum: No registered users and 25 guests