Violent Proto-Fascists Came To Portland. The Police Went After The Anti-Fascists.

By Christopher Mathias and Andy Campbell

PORTLAND, Ore. ― Police did a good job on Saturday preventing what could have been the most violent far-right rally since last year’s deadly “Unite the Right” gathering in Charlottesville, Virginia — all they had to do was protect the proto-fascists who came to town, and use riot control weapons, flash-bang grenades and chemical irritants against anti-fascist counter-protesters.

For hours, dozens of officers in full riot gear stood across a closed section of Naito Parkway along the Willamette River, keeping the two sides apart. On one side of the parkway, in Tom McCall Waterfront Park, stood hundreds of out-of-towners belonging to the Proud Boys — a punch-drunk far-right group of self-described “Western chauvinists” dressed in helmets and body armor — and those aligned with Patriot Prayer and its leader Joey Gibson, a Republican Senate candidate from Washington state who has held a series of increasingly violent rallies in the Pacific Northwest since 2017.

Both groups have deep ties to white supremacists.

So it’s noon in #portland and right now police are keeping the two sides separated. Hundreds of Anti-fascist counter-protesters with a brass band look across the street at Proud Boys and Patriot Prayer. More PBs and PP on their way. #AllOutPDX


On the other side of the parkway stood hundreds counter-protesters belonging to a broad coalition of local anti-fascist, anti-racist and social justice groups. They had a clear message: This is our city. Get out.

“We remember Charlottesville!” they chanted.

Referring to the 32-year-old counter-protester at last August’s gathering who was run down by a car, they yelled, “You got Heather Heyer killed!”

They chanted the names of Ricky Best and Taliesin Myrddin Namkai-Meche, two men allegedly killed by a white supremacist named Jeremy Christian last year in Portland when they tried to stop Christian from threatening two black teenage girls. (The month before the murders, Christian had attended a Patriot Prayer rally.)

The counter-protesters held signs detailing the assaults and other crimes allegedly committed by Proud Boys and Patriot Prayer members in the Portland area.


And yet, when police decided the standoff was too tense for comfort, they targeted the local anti-fascists. As officers lobbed flash-bang grenades at them — ear-piercing explosives that temporarily disorient the senses — Proud Boys and Patriot Prayer members cheered on the cops, claiming victory against the “violent leftists” they’d come expecting to fight themselves.

One police flash-bang canister reportedly pierced an anti-fascist’s helmet, cutting into his head. “I’m certain he would be dead if he wasn’t wearing a helmet,” 39-year-old Jenny Nickolaus, an anti-fascist demonstrator and friend of the victim, told HuffPost. “The trauma nurse said as much.”


Portland Police Sgt. Chris Burley told HuffPost he was “not aware of anyone that received medical treatment for injuries suffered by actions of law enforcement today. If someone reported being injured by police action today we would like to speak with them.”

A woman also was hit by a flash-bang grenade, her boyfriend told The Willamette Week, leaving her with cuts and a possible arm fracture. Eder Campuzano, a reporter from The Oregonian, went to the hospital after being struck in the head by an object thrown by counter-protesters. 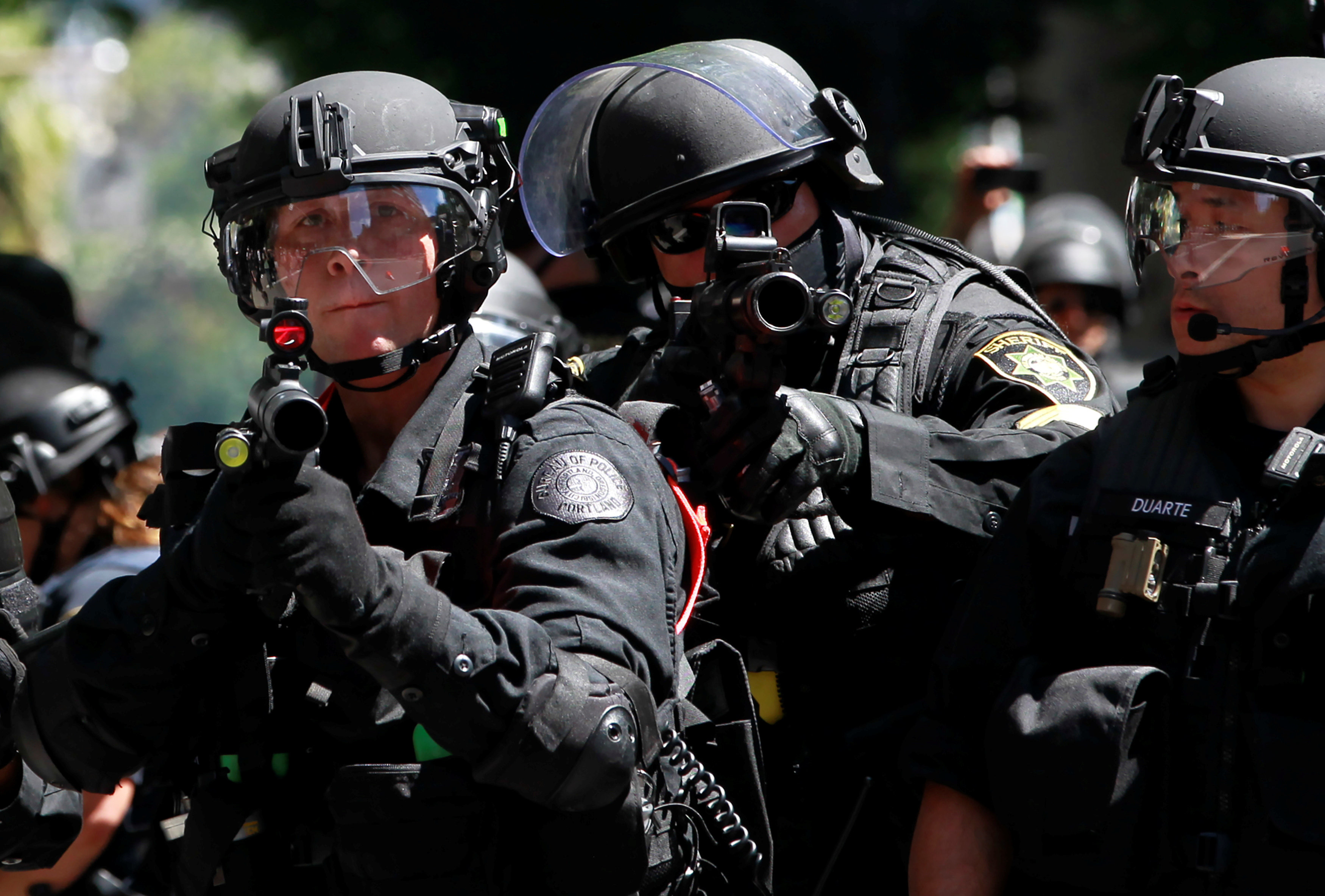 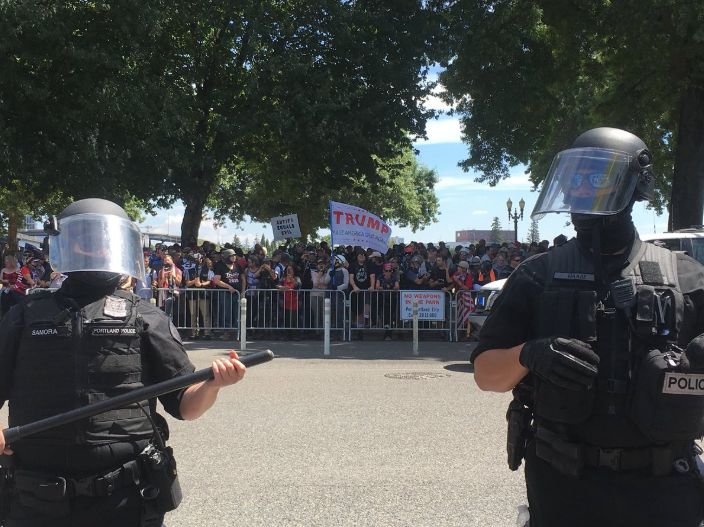 This is America’s modern “free speech” rally in the era of President Donald Trump. Trollish far-right leaders, like Gibson, plan a battle royale disguised as a celebration of the First Amendment. People come decked out with weapons and armor to fight anti-fascists, and one of two things happens: The two sides beat the living snot out of one another en masse, or police break it up.

At the “Unite the Right” rally in Charlottesville, the former happened, ending with a neo-Nazi allegedly driving a car into a crowd of anti-racist protesters, killing Heyer and injuring 19 others.

On June 30 in Portland, the city declared a riot after police let Patriot Prayer and Proud Boys brawl with anti-fascists in the streets. Some half a dozen people were sent to the hospital after the day’s chaos, one with a brain hemorrhage.

There were fears that Saturday’s rally would be even worse. But this time police successfully kept the sides separated — yet as they have at other Patriot Prayer gatherings, they targeted counter-protesters with their weapons and defended those aligned with white supremacy.

“Police launched a violent attack on the left that was unprovoked in an attempt to allow Patriot Prayer and Proud Boys to go on their march,” said Effie Baum, spokesperson for Popular Mobilization, a coalition of anti-racist and anti-fascist groups formed for today’s counter-demonstration.

“When people say there was no violence today between the right and left, there was absolutely violence, and it was perpetrated by the police on the left.”

At about 2 p.m., cops warned anti-fascist demonstrators that they needed to move west, away from the parkway, or “face arrest” and “impact weapons.”


The reason for this initial order was confusing. The police claimed they spotted anti-fascists with weapons, but HuffPost saw Patriot Prayer members and Proud Boys armed with weapons as well (and police confiscated some of them).

The police claimed that the anti-fascists were blocking traffic — but in order to protest against Patriot Prayer and the Proud Boys, there was, at times, nowhere else to stand but in the road. HuffPost did not witness anti-fascist protesters provoke or attack police before the initial dispersal order.

The anti-fascists didn’t budge. And police launched their attack.

A cat-and-mouse game ensued throughout downtown Portland, with cops chasing after anti-fascists from corner to corner, demanding each time that they disperse or face arrest. More flash-bangs. More tear gas. A handful of anti-fascists then started to hurl rocks and water bottles at the riot police.

“The groups involved in the protests escalated in behavior and threw projectiles, including rocks, smoke bombs, firework mortars, unknown chemical agents, bottles, items from a slingshot, and other projectiles at officers and protesters,” the Portland Police Bureau said in a statement.

Police also claimed that, at one point, they “learned multiple police vehicles, possibly with officers inside them, were trapped in a group of protesters who were throwing an unknown chemical agent as well as other projectiles at officers.”

Police ultimately found no officers inside the vehicles, but did say three police vehicles sustained some damages.

Police said they arrested four people on a slew of charges that included resisting arrest, disorderly conduct, attempted assault, harassment, assault on an officer and unlawful use of a weapon (a slingshot).

As cops chased anti-fascists through the streets, Patriot Prayer and Proud Boys were also on the move, marching west from the river into downtown. (A couple had been injured, having reportedly walked through a throng of anti-fascists, and had cuts on their heads.) They were flanked by police in riot gear, who never engaged them despite demanding that they disperse several times.


The Patriot Prayer and Proud Boy demonstrators eventually ran into the anti-fascists, and cops rushed to keep the two sides separated. Police then declared the day’s demonstration a “civil disturbance” and ordered both sides to disperse or face arrest and the use of “riot control agents and impact weapons.”

Patriot Prayer and the Proud Boys made their way back to the waterfront park, where they cooled off in a fountain and celebrated what they claimed was a victory.

Tusitala ‘Tiny’ Toese, a Proud Boy and Patriot Prayer member implicated in the May assault of an anti-Trump person in the Portland area, donned a “Pinochet Did Nothing Wrong” T-shirt, referring to the far-right fascist Chilean dictator who murdered some 40,000 of his own people.

“Make communists afraid of rotary aircraft again,” read the back of Toese’s shirt, referring to the penchant of forces loyal to Pinochet of throwing political rivals out of helicopters. (Toese’s shirt was made by a white nationalist clothing company called Right Wing Death Squads.)

Asked by HuffPost how he thought Saturday’s rally went, Toese described it as “awesome” and “beautiful.” The Portland police, he said, “did their job.”


“Today was a victory for America!” he later told a group of his cheering supporters.

Later, journalist Brendan O’Connor reported on Twitter that some Proud Boys “sprayed bear mace” at a group of anti-fascists as they drove out of Portland.

Anti-fascists across America have long accused police of siding with, and protecting, white supremacists and fascists. Earlier this year in Newnan, Georgia, heavily militarized police charged at anti-fascists demonstrating against a neo-Nazi rally, pointing guns in their faces.

Still, Baum added, it was the anti-fascists who were actually victorious. The left, Baum said, is often marred by divisions between more militant “black bloc” anti-fascists and more liberal, non-violent protesters.

Saturday saw “a very unified anti-fascist opposition” of some 1,500 people that “quite literally almost made me cry,” Baum said.

By Baum’s count, they outnumbered Patriot Prayer and the Proud Boys by four to one.

America does not do a good job of tracking incidents of hate and bias. We need your help to create a database of such incidents across the country, so we all know what’s going on. Tell us your story.

Proud Boys in a truck just sprayed bear mace at antifa blocking their way, leaving a street full of coughing, tearing people behind 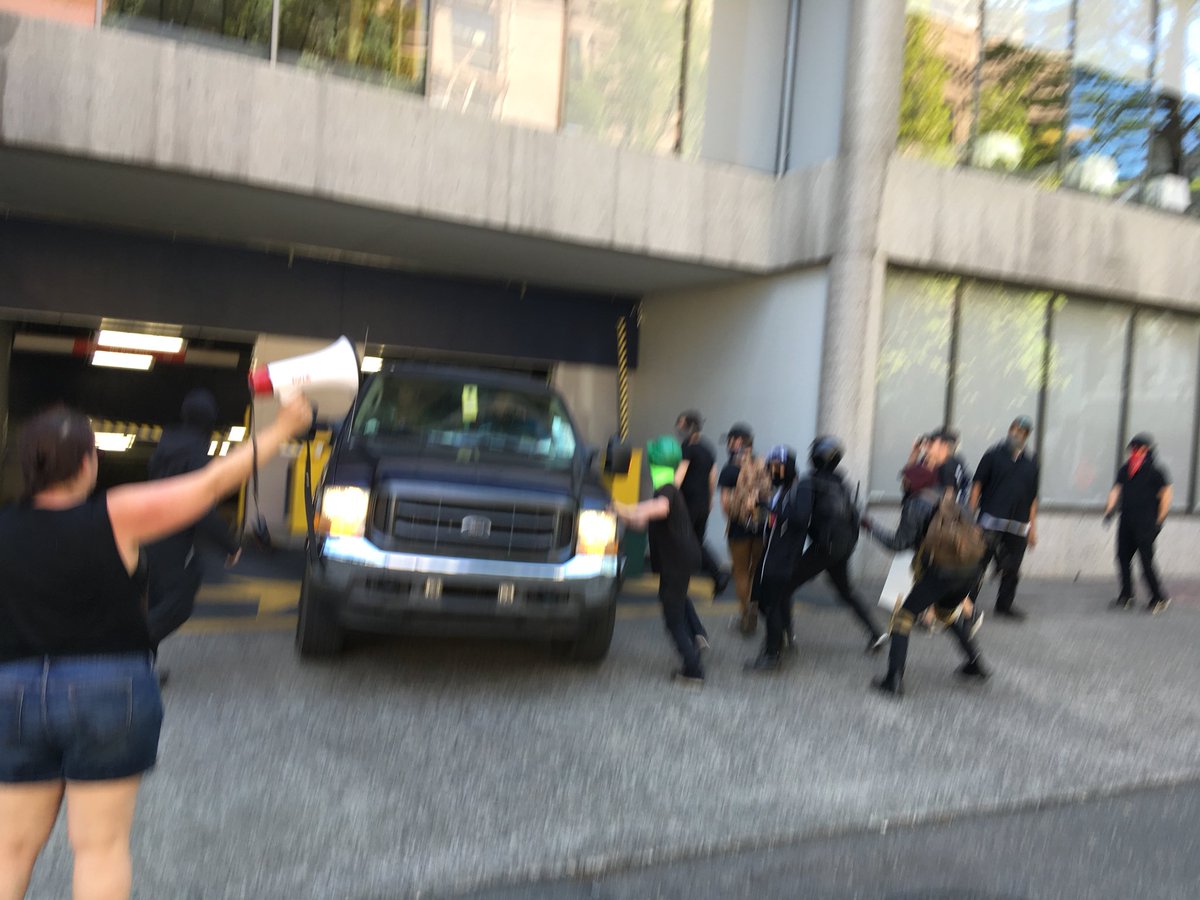 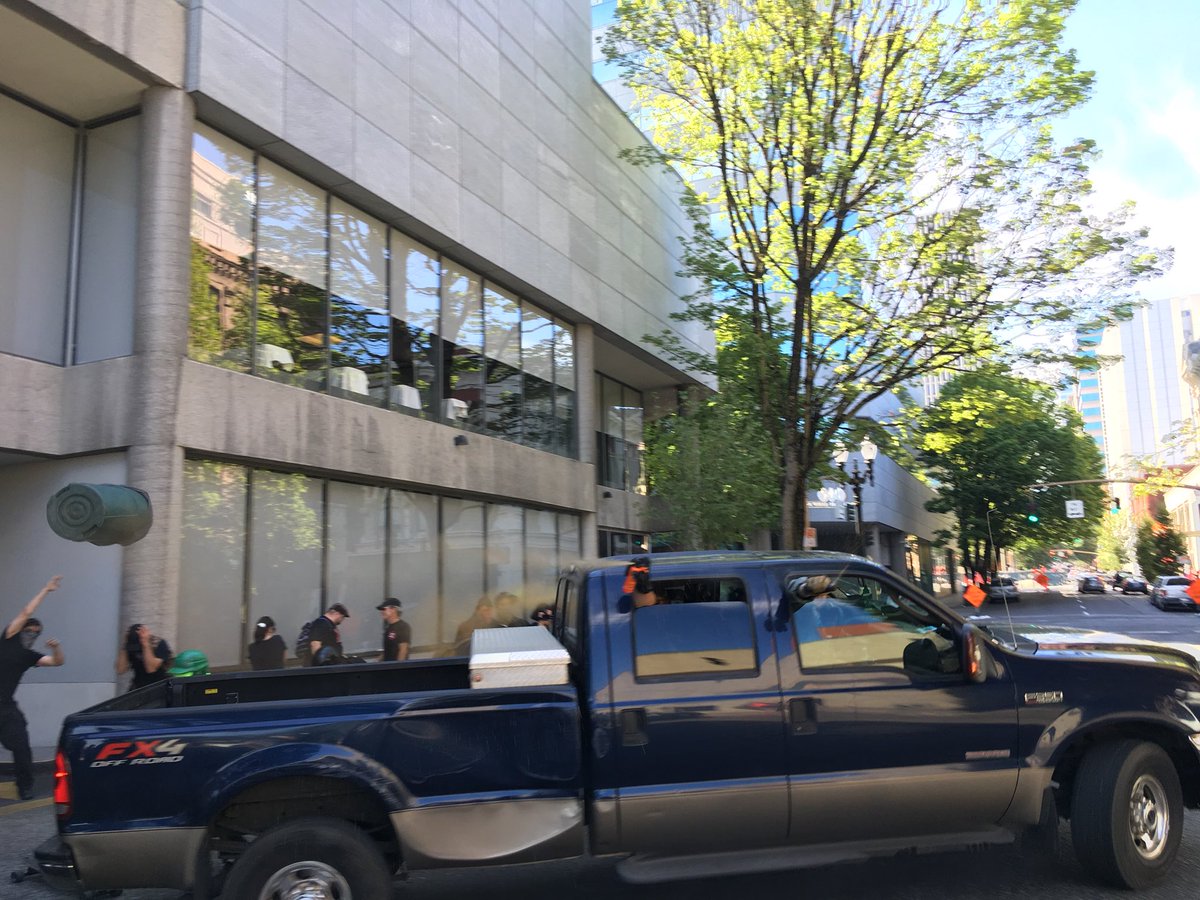 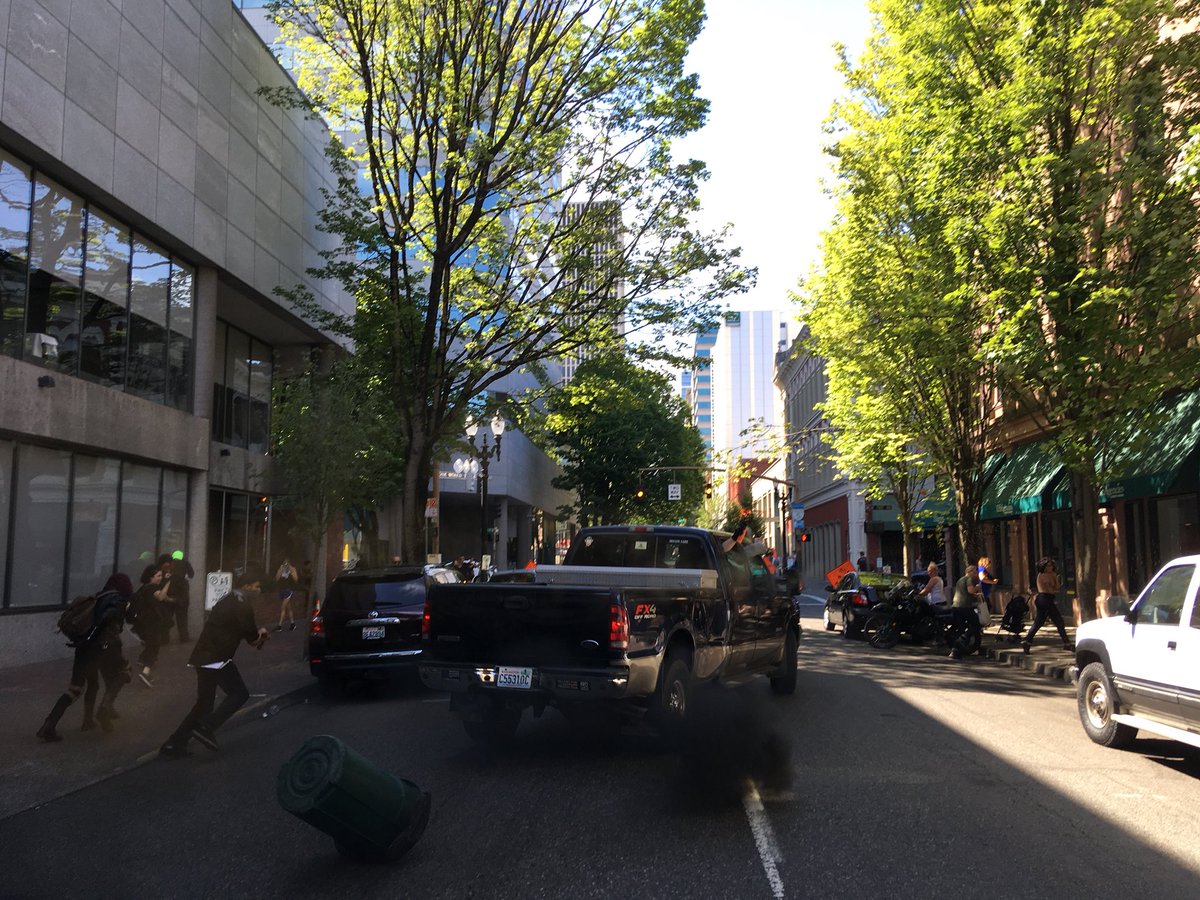 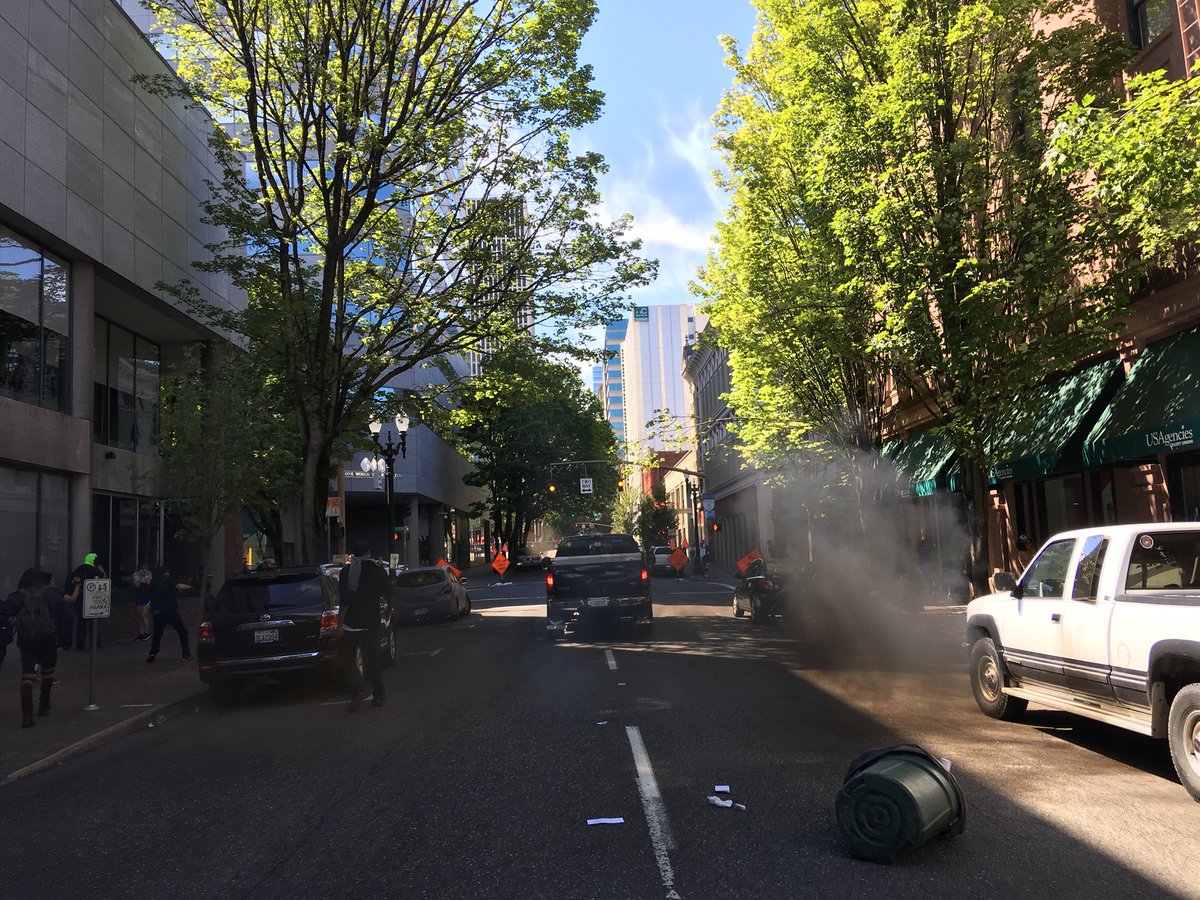 You do not have the required permissions to view the files attached to this post.
Last edited by seemslikeadream on Sun Aug 05, 2018 4:06 pm, edited 1 time in total.
Mazars and Deutsche Bank could have ended this nightmare before it started.
They could still get him out of office.
But instead, they want mass death.
Don’t forget that.

I thank the lord above I was not there this weekend. I stayed at a hotel there, right on the parkway and waterfront two weeks ago. I met up with a friend and his young daughter (11) in from Denver. Eeesh. That would have been so fucking awful. It was awful as it was (thanks Amtrak /s), but boy. So glad she didn't get caught up in that.

Yes, no doubt the cops target the "antifa" and protect the fascists. Same as it always was. But as an aside, there is a Fred Meyer store across the river in Vancouver and all the racists thought they could park there and take buses over to Portland. The store manager had their cars all towed. Watch for that cat getting a lot of shit in the near future.

oh sure I didn't realize it was a problem .....the very last thing I want to do here today is to be even more annoying

thanks for pointing that out ..I'll fix my other posts also
Mazars and Deutsche Bank could have ended this nightmare before it started.
They could still get him out of office.
But instead, they want mass death.
Don’t forget that. Police tackle and arrest a person after they charge at anti-fascism protesters and deploy a mixture of batons, rubber bullets, pepper spray, and flash-bangs

Video report from the streets of Portland from Sub.Media.

Video Ninja Jake Westly Anderson went to Portland on August 4th, to cover the confrontation between anti-fascists and Patriot Prayer and filed this report:

“Police nearly killed a counter protester after firing a projectile through their helmet. After the Proud Boys, Patriot Prayer and other right wing nationalists descended on Portland, things turned violent as police attacked community counter demonstrators. The Portland police department used concussion grenades, pepper-spray, paint balls, and flash bangs on both bystanders, counter protesters, journalists and civil society groups that were on the scene.

The attack seemed largely unprovoked, especially when compared to the indiscriminate and near fatal response. Meanwhile, far right extremists, some of whom fought in Charlottesville, where basically left alone, despite many being masked and armed. This is the first of several videos we’ll be releasing.

Thank you for supporting independent media. We’ll do our best to continue to cover this story. Please share this video to help us get the word out.