The Russian Conspiracy as RI subject

Thanks for those, Elvis.

Savage (NYT) wrote: In January 2017, the F.B.I. interviewed Mr. Steele’s own primary source, and he contradicted what Mr. Steele had written in the dossier.

The source for Mr. Steele may, of course, have been lying.

Do we have any indication of who that source might have been?

Elvis » Mon Dec 16, 2019 1:29 am wrote:Some good calling-out on Twitter. @Techno Fog is posting screenshots of MSM hacks' past Tweets in case they start deleting them.

WaPo reporter @shaneharris
has been lying to the public this whole time.

Yes. I am telling you the dossier was not used as the basis for a FISA warrant on Carter Page. 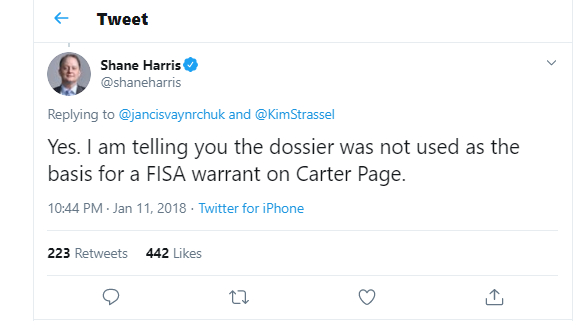 
"Trump is wrong about Carter Page, the dossier and the FISA warrant"

Go to link for full Tweets & exchanges but here's a few more examples:

Most of the dossier "has been validated"

CNN Anchor @jimsciutto
gets it wrong.


...all got it wrong and pushed the propaganda on us. They will probably get promotions and pay raises.

Right, because they didn't 'get it wrong' , but rather, they were simply doing what they get paid to do: Mis/disinform. There's no 'reporting error' here.

(Stating what's already understood by you and most of RI) 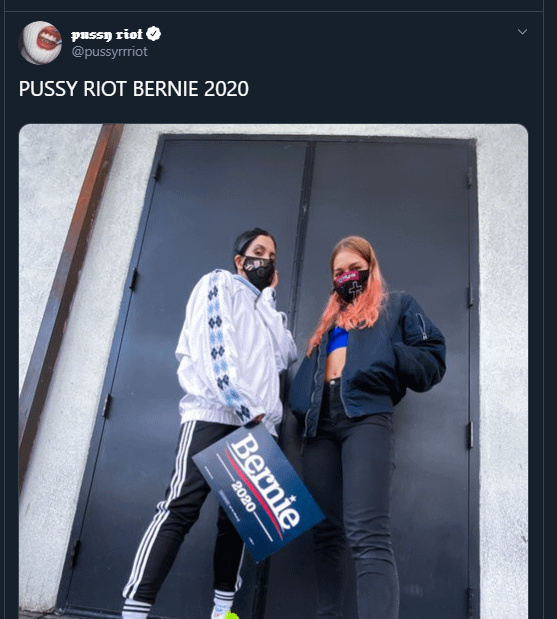 "It's not rocket surgery." - Elvis

For realz? Good. There goes their CIA funding.

"Frankly, I don't think it's a good idea but the sums proposed are enormous."

Never knew until now, but the original pilot for The Rachel Maddow Show originally ran on Canadian TV roundabouts 1995.


https://www.youtube.com/watch?v=83tnWFojtcY
We meet at the borders of our being, we dream something of each others reality. - Harvey of R.I.

"When I'm done ranting about elite power that rules the planet under a totalitarian government that uses the media in order to keep people stupid, my throat gets parched. That's why I drink Orange Drink!"

Killer bees! LMAO!! Thank you, mentalgongfu2, that made my night..

I suppose this goes here, though it could also work in "Sanders is seriously dangerous" or elsewhere.

Zephyr Teachout's column was not only right but mild. Read it:

We don’t have to choose Biden’s way, which would give Trump a perfect foil

Biden's pay-to-play dealings typify the systemic political corruption under capitalism. It doesn't matter that it's legal. Who legalized every species of conflict-of-interest, political bribery, nepotism? Oh, right, forty years of Biden and the Bipartisans. (Of course the history is longer than this but there's no doubt on how they stood politically in deregulating the flow and reach of money.)

It doesn't matter how much worse Trump is! Of course he's worse! Figure it out, Trump has a base. He plays their Leader. They follow him! This is not a joke, it really is the time of death coming.

You get one chance to stop the beast. There is no safe option or assured route. Biden's right-wing politics, at best, will leave the un-Trumpian majority apathetic and demobilized. His legal family enrichment and his decades of loyal service to the corporations will be fat and easy targets.

Do you think Trump's predatory instincts were in error, when he tried to sic Ukraine back on the Burisma case? Obviously this will stick to Joe, don't delude yourself with the corporate media talk about how Hunter's payoffs are "appropriate." The more Biden points to Trumpian corruption in response, the more they look the same regardless of some important underlying differences. And Joe's lost whatever game he had, this ain't 2015 no more. Look at all his meltdowns -- how the hell is he going to withstand what's coming? Is this really the show you want to watch unfold for the next 10 months?

In short, Sanders should never have apologized for what Teachout wrote. (See, https://www.nytimes.com/2020/01/21/us/p ... biden.html) She is among the leading legal experts on these issues and a thoroughly upstanding, righteous person. (For me it was a pleasure meeing her, that one time.)

In response to those bewailing Teachout's column, all that Sanders needed to say was that she is a law professor and she writes what she likes. Apologizing for her is probably a tactical move, yes. Look like a nice guy. "Unity." Teachout doesn't seem to mind, she just reiterated her endorsement of Sanders.

But this is no time to apologize for straight and honest talk. Not from the guy who just told the assembled New York Times editorial board, to their faces, that they are sad creatures, waiting for birthday cards from people who know they are empty suits, full of shit. There is no going back.

The "centrist" campaigns, the party establishment, the corporate media, the Old Republican "Never-Trump" war criminals who have seized land among the Democrats, and the Clinton-gang punditry will continue to manufacture bogus, irrelevant, and outrageous attacks. Every single day. They are following the same dirty strategy of personal slander that was thrown against Corbyn in the UK. They will show no limits, no shame, no concern whatsoever for any interest other than the narrow aim of destroying Sanders and the new left movement. They will tell you the Jewish socialist from Brooklyn is anti-Semitic. They are hostiles. If it means losing to Trump, they don't care. Some people prefer to watch the world burn.

The right way to deal with this rhetorical aggression is to take no shit. Hit back. Keep it brief, but no apologies. Stick to real politics. Win the damn votes. Once these forces are pushed back, it will be on them to decide just how much further they intend to help Trump's reelection. Fuck them. Of course Sanders should not go as far as Tulsi Gabbard, but her lawsuit in response to Clinton, who literally accused her of treason, should serve as the guiding star in how to deal with slander from hostiles.

Sanders is rising at the right time. Unlike with Corbyn, who was battered by "his own side" for five years, the time-frame for establishing slanders against him is short.

Is it me, or do most Americans seem to have stopped caring about the daily corporate media bullshit? Are they perhaps suffering from bullshit overload? Either way, it's not sticking like it used to. My evidence is that after three years of the most fanatically repetitive top-down propaganda campaign I've ever seen in this country, most people care less than ever about the manufactured Russian threat. Quick, who's Oleg Deripaska?

Some of you do know the answers to that last one, at least sort of. You may have convinced yourself this name's more important and consequential to the course of U.S. politics or the actions of the Trump regime than Prince, DeVos, Walton, Thiel and Bezos combined. You exceptions are plentiful among my highly educated and generally sharp friends: a minority, but well ensconced in your filter bubbles, you are probably disillusioned with what a dud the #Russiagate main narrative proved to be. But now you cling to its offspring: the impeachment strategy that may as well have been designed to lose.

Are you actually deluding yourselves that John Fucking Murder-Man Bolton, who delivers keynote speeches at conventions of literal terrorist organizations (MEK), and who might dance in public if nuclear weapons were dropped on a few million Iranians, is going to help unseat Trump? Maybe, if you promise to drop that nuke for him.

It makes me sad to see you this way.

Are you taking inspiration from Schiff's unhinged war talk? The way he dehumanizes Russians, just like Trump dehumanizes Muslims and Mexicans (and everyone else)? Schiff is channeling no lesser criminal than G. W. Bush himself, repeating the slogan of "we must fight them over there" -- what the fuck!? -- so "we don't fight them over here."

Please figure out that this does not damage Trump. Reaction is not the answer for reaction. Inciting more war in Ukraine is not your national security!

My friends, there is still hope for you. I'm not a liberal, I'm a leftist. But in what universe is this your liberalism? Rediscover your principles.

We meet at the borders of our being, we dream something of each others reality. - Harvey of R.I.

Killer bees! LMAO!! Thank you, mentalgongfu2, that made my night..

@mentalgongfu2, yes! Cheers!
And while we spoke of many things, fools and kings
This he said to me
"The greatest thing
You'll ever learn
Is just to love
And be loved
In return"

This could go in a different thread - on impeachment, or censorship practics - but to me the impeachment story is the new season of #Russiagate.

As you probably know, during the proceedings last night (30 Jan), senators were allowed to ask questions only by submitting them in writing to Roberts in advance. Rand Paul submitted a question which he used the name (known for months) of the alleged White House whistleblower from the CIA, although phrased such that it did not identify this person, Eric Ciaramella, as the whistleblower. Roberts refused to read it. Paul went out to the press and read his question, and then tweeted the text, thus "revealing" the alleged whistleblower's name.

In an FB discussion, someone asked who Paul had named. Remember, this was already online at Paul's twitter feed, and still is. I responded as in the screenshot. Next morning, FB had banned me for 24 hours, for facilitating or abetting crime!

The FB notice I received, reproducing my apparently offensive comment, which again was in response to someone asking what the name was and where they could find Paul's comment:

We meet at the borders of our being, we dream something of each others reality. - Harvey of R.I.

WHAAAT? Outrageous. As the facade of late capitalism finally crumbles to reveal the authoritarianism beyond, so do the social media giants, having first captured the time, effort, social networks and personal data of their users, now begin to use their levers in a more and more over way, it seems. JFC.
-I don't like hoodlums.
-That's just a word, Marlowe. We have that kind of world. Two wars gave it to us and we are going to keep it.

In other words, this 24-hour ban seems to have not actually been effected. Or was it that they reversed it following my complaint? I doubt that. I figure one employed monkey pushes a button sending that message automatically, another one pushes another button that renders it irrelevant. Or something. Or the monkeys are algorithms with conflicting coding.

I expect the key is not to activate a horde of live idiots who make actual complaints. So, for example, don't say mean things about poor little Israel.

But this is noted as hair-raising, wrong, and outrageous. I mean, the part that's totally unacceptable and a serious violation, even a kind of endangerment, is the wording: "coordinating harm and promoting crime." Get the fuck out of here!!!