alright, one more Icon and that is it for me!

Yesterday, news broke that an ancient sex tape allegedly showing Marilyn Monroe giving a blowjoy to an unidentified male had not only surfaced, but had also been sold to an anonymous New York collector for $1.5 million. The NY Post's Hasani Gittens broke the story after interviewing Keya Morgan, a memorabilia collector who claims to have brokered the sale of the 15 minute reel. However, what the Post failed to mention in their story is that Morgan is well-known within the tight-knit circle of Marilyn Monroe memorabilia collectors for being a sycophantic, press hungry namedropper (check out his likely self-penned IMDB bio) whose main objective is to promote himself and the Monroe documentary that he is working on. Not only has he been known to casually claim that he has dated both Mariah Carey and Renee Zellweger, he has thus far refused to disclose either the names of either the seller or buyer of the tape; additionally, he has not been able to provide evidence that this alleged sale even occurred.

To that end, Defamer worked with a trio of Marilyn Monroe experts in an effort to get to the bottom of Keya Morgan's outrageous claims. The team of Mark Bellinghaus (one of the foremost Marilyn Monroe experts/collectors in the world), Ernest W. Cunningham (author of The Ultimate Marilyn) and freelance journalist Jennifer J. Dickinson to put together the following piece. It's one of the longer pieces that we have ever published at Defamer, but we think that it's well worth your time. And with that, please enjoy. — MDG

While we're at it, fair warning for scroungers that go searching for this holy relic; there's a great gag going on the bittorrent channels about a DVD rip of Cloverfield(with a TON of positive comments) I kinda jumped on(yes, I buy movies I download, so don't even try it..).

I open this thing up, and its 3 hours of Special Olympics from 1996.

"but I do know that you should remove my full name from your sig. Dig?" - Unnamed, Super Scary Persun, bbrrrrr....

How to Create A Marilyn Myth


Let's say you wanted to lure a scoop-horny, gullible media into promoting your upcoming documentary on Marilyn Monroe. But you didn't want anyone suing you later. Here's how:

Seed your hoax with a kernel of truth. Mine the recently unsealed FBI files (part 2, pages 68-70) you ran across in your research for your Marilyn-murder-conspiracy theory piece. You'll find mention of a 15-minute, 8- or 16-millimeter "'French-type' movie which depicted Marilyn Monroe, deceased actress, in unnatural acts with an unknown male." Around that nugget, craft a myth about a confidential FBI informant who blabbed about the alleged BJ reel. Say he made a copy for himself then left it to his son (also anonymous) when he died. Say you found the son with the help of an 80-year-old retired FBI agent and your lawyer (both anonymous). Say you brokered a deal between the son and a wealthy (anonymous) businessman who promised to lock up the film forever. If asked how you, the only named person to have seen the reel are sure it's Marilyn, explain that the woman in the film was blonde and had a mole in the right place. Say some other anonymous FBI agents saw it and confirmed it. Say she was "radiant ... She was known for being radiant." (Watch the interviewer eat that one up.)

Half-cocked, weirdly biased barb-trading aside, Morgan, who claims to have brokered the $1.5 million sale of a 15-minute Monroe oral sex film to protect her image is a liar—at least when it comes to the details in his so-called unearthing of the reel. All he had to do was make available one of his sources, show five minutes of the film to a select reporter or two who'd signed a confidentiality agreement. But he couldn't.

In an interview with Radar, Morgan declined to name any of his sources—the FBI's confidential informant, his son, the alleged buyer, or the 80-year-old former FBI agent, whose alleged position camped outside of Monroe's place in a van all those years ago somehow put him in the position to lead Morgan to find the owner of the inherited film. When we asked how Morgan knew the tape was real, he didn't go with the hair color, mole, and radiance argument, to his credit. "The FBI agent told me so," he said. Plus, he added, "nine agents analyzed it in a room without air conditioning over and over again." He said the recently unsealed FBI documents on the FBI's website indicate this. But they don't. Agents were focused on trying to identify the man in the video (as JFK—they were unsuccessful).

"Joe DiMaggio saw it and he verified its authenticity and he offered $25,000 back then," Morgan told Dan Abrams on MSNBC. "Now, Joe DiMaggio is no fool." Morgan repeated the same claim to Radar. "Joe DiMaggio had 100 percent seen it," he said. But the FBI documents don't say that, either.

[Redacted] Top Echelon is an informant of [redacted]. The Laboratory has no information concerning Marilyn Monroe's participation in a film as described in the attached communication. Since dissemination may compromise the informant, it is recommended this information not be disseminated outside the Bureau.

Morgan's response after being presented this by Radar: "You don't have the same documents I do." In other words, he said, his source provided him with sealed documents that backed up what he said, documents no one but he has. Seeing a pattern?

Whether the FBI itself even has a copy of the film is up for debate (The Smoking Gun just posted a pretty thorough investigation of this particular point.)

Lots more will come out about Morgan's character and his attackers will be attacked too. But here's the beauty behind his ruse: There's no victim. Other than those who, for their own special reasons, feel it their charge to protect the legacy of Marilyn Monroe, no one lost anything in this hosejob. No credible evidence exists of a seller or buyer or even of the film copy (or original, for that matter—the FBI told Abrams they had no recollection of it). Morgan told Radar he received no commission for brokering this sale. He only stands to benefit from the press he's garnered. And the only ones potentially harmed by this hoax are already dead—or the suckers who pay to see his forthcoming documentary. If that even exists.

**WARNING - IT IS A PORNOGRAPHIC MOVIE CLIP SITE.DEFINITELY NOT SAFE FOR WORK OR CHILDREN.DO NOT CONSTRUCT THE LINK IF EASILY OFFENDED**


For those who would rather not go there,heres a couple of SAFE FOR WORK screenshots..face only.(nearly said facial..

the actual movie is not just a BJ.The man involved doesn't look like anyone famous I recognise.

The JFK Photo That Could Have Changed History | TMZ.com

rigorousintuition.ca :: View topic - Celebrity News is Killing Us
We’re in the upside down.

Fools! the one and only Goddessifiable... is Hedy!

http://www.youtube.com/watch?v=DKRxVmcyKHw
Suffering raises up those souls that are truly great; it is only small souls that are made mean-spirited by it.
- Alexandra David-Neel

You've got that right, Uncle.

On August 11, 1942, U.S. Patent 2,292,387 was granted to Antheil and "Hedy Kiesler Markey", Lamarr's married name at the time. This early version of frequency hopping used a piano roll to change between 88 frequencies and was intended to make radio-guided torpedoes harder for enemies to detect or jam.

Lamarr's and Antheil's frequency-hopping idea serves as a basis for modern spread-spectrum communication technology, such as COFDM used in Wi-Fi network connections and CDMA used in some cordless and wireless telephones.[

The most dangerous traps are the ones you set for yourself. - Phillip Marlowe

There was once a rumour that a tape existed from shortly before her death of her being raped by Sinatra and Giancana.
Those who dream by night in the dusty recesses of their minds wake in the day to find that all was vanity; but the dreamers of the day are dangerous men, for they may act their dream with open eyes, and make it possible. -- Lawrence of Arabia

I thought the Probe articles by Jim DiEugenio were very intriguing. Seymour Hersh gets lots of plaudits, some even from "radical" analysts... However, I seem to remember reading somewhere that he himself has admitted that he mainly uses anonymous official sources for his reporting, making him an ideal conduit for disinformation. To think I sometimes thought that "The Dark Side of Camelot" would be a worthwhile read...
-I don't like hoodlums.
-That's just a word, Marlowe. We have that kind of world. Two wars gave it to us and we are going to keep it.

Attack Ships on Fire wrote:I think it's wonderful that this thread has turned into a love fest for hot 1950s-60s starlets. 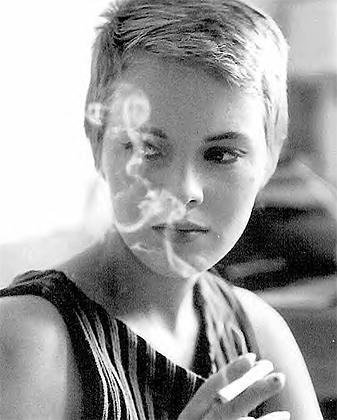 Emma Best
FBI releases 15 new pages on Jean Seberg and the #COINTELPRO effort targeting her, as well as the letter she wrote the FBI about it. https://www.muckrock.com/foi/united-sta ... ile-806227 … #FOIA

Mazars and Deutsche Bank could have ended this nightmare before it started.
They could still get him out of office.
But instead, they want mass death.
Don’t forget that.